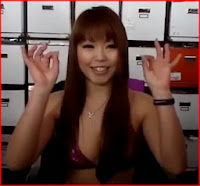 As you know, one of my favorite hobbies is discovering unusual Japanese products and replicating them, using materials I find at the Dollar Store.

And blogging about my results.

At the risk of tooting my own horn, I have out-done myself again.  Without even one trip to the Dollar Store.

It was simply serendipitous.

The product that I was attempting to clone is a new Japanese Bikini my friend Jamie told me about.  The bikini bottom has no waist band or ties.  It snaps in place, ostensibly defying gravity.

Jamie showed me a YouTube video of a Japanese woman modelling the bikini.  The woman assumed a number of ridiculous unusual poses in an effort to demonstrate the amazing bikini’s aversion to gravity.

When I looked closer at the bikini bottoms, a light bulb went off in my head.   That Japanese Bikini bottom looked remarkably similar to a head band which I re-purposed as a Camel Toe Protector. 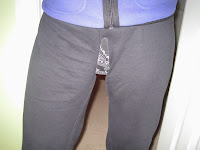 Which I could re-re-purpose as a Nerdling Japanese Bikini!

So I went home and tried on my Nerdling Japanese Bikini.  It certainly looked good, but would it work?

I gingerly walked around the house.  It stayed put!

What if I danced?  I executed some of my most impressive Body Jam moves.   It didn’t move an inch.

But could I pogo stick in my Nerdling Japanese Bikini?

Better put that in the fine print.

Please notice how seriously I take my products and how thoroughly I test them.  I am trying to avoid any and all frivolous lawsuits should my Nerdling Japanese Bikini accidentally slip off some unsuspecting woman.

(I hate to disappoint my readers, but I decided not to include any photos of myself test-driving my Nerdling Japanese Bikini.  It’s not that I don’t look A-M-A-Z-I-N-G in it.  I just don’t want any frivolous lawsuits should someone see the pictures and end up with serious long-term psychological damage.)

So I decided that Barbie could model it. 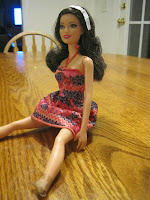 I could not find a Barbie Head Band, so I made one for her out of tin foil.

I am a big supporter in Affirmative Action, so I chose Handicapped Barbie as my model (the one who bravely sacrificed her feet in my Barbie Foot Earring project).

And, since she is missing her feet, I had to prop the gimp on a wine glass. 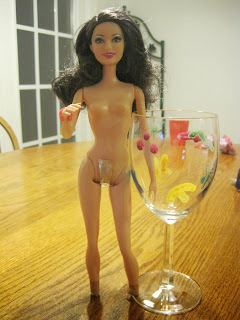 But, as you can see, the  Nerdling Japanese Bikini looks amazing on Handicapped Barbie.  Even from behind. 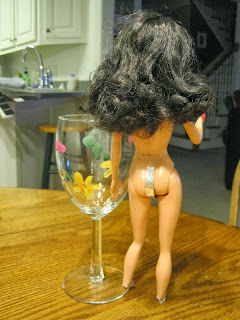 But, buyer be warned.

Do not wear your Nerdling Japanese Bikini while pogo sticking.
Posted by Lou Clyde at 7:26 PM No comments:

Those crafty Japanese have done it again, catching U.S. toothpaste manufacturers resting on their lagging laurels. 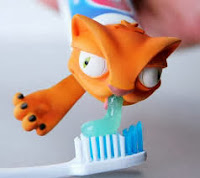 It’s really kind of embarrassing.  Colgate and Crest have been utterly myopic in terms of product design.

They have been offering the same hapless assortments of white and pastel colored toothpaste, with flavors ranging from mint to baking soda for decades.

In the meantime, the Japanese have stepped out of the box with their cutting-edge Binotomo Nasu Dentifrice Jet Black Toothpaste.

Not only does it “leave your pearly whites feeling super clean”, it’s good for you!  It contains eggplant.

To be honest, getting my minimum daily requirement of vegetables is a constant struggle for me.  And I can think of no more convenient way to consume my daily eggplant servings than via my toothpaste.

Whatever.  I’m not going to worry about that.  I have never accidentally squeezed toothpaste onto my clothes. 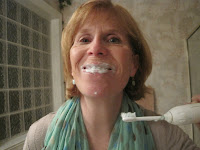 And, at the risk of ruining my reputation as a polished and refined young woman, I do this on a daily routine basis.

Maybe Binotomo Nasu Dentifrice Jet Black Toothpaste is not for me, after all.

Besides, if Binotomo Nasu Dentifrice Jet Black Toothpaste can stain your clothes, how come it doesn’t stain your teeth?

I decided to do a bit more research on Japanese toothpaste. 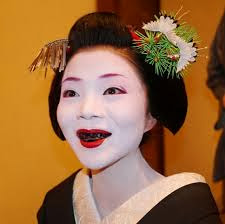 I think I'll stick with the pastels.
Posted by Lou Clyde at 6:07 PM No comments:

When my friend Mary told me about the Ravijoir True Love Tester I got goosebumps.  A bra that unclasps itself for true love?  That knows how women truly feel?  That was developed by the Japanese?

Apparently the Ravijour True Love Tester works in conjunction with your smart phone to analyze your “levels”.  It will lock up your bra, protecting the girls, unless the sensors detect that the woman truly wants her bra removed.

For example, if you are being seduced by riff-raff like this, the gates would likely remain closed.

Which makes it a modern day chastity belt for the boobs.

It cannot be unhooked without true love.  Sigh.

My heart races when I’m nervous.  Like before I walk on stage.  I stress about remembering my lines and my blocking, or being hit by Greased Lightening during curtain call.  I certainly don’t want to have to worry about my bra falling off!

Which reminds me of that infamous presentation I made early in my career.   About 10 minutes into it I felt my shoulder pad slowly making its way down my left arm, not unlike a cat sneaking up on an unsuspecting mouse.

When it got to my elbow I nonchalantly flicked it to the floor.   But my aim was off and it fell a bit stage left of the podium.
Now this was pre-PowerPoint.  When all eyes were on the presenter.
Except all eyes were not on me.  All eyes were on my foot which was attempting to snare the shoulder pad and bring it to safety behind the podium.

The women in the room all recognized the object as a shoulder pad, and were starting to whisper.  And giggle.  The men were just confused, at least one believing it to be a sanitary napkin.

As I was researching this topic, I discovered that the Ravijour is actually a knock-off of the MicroSoft SmartBra.

Which would make it a knocker off.

The MicroSoft SmartBra is designed to monitor a woman’s emotional moods to combat overeating.

You can't make this shit up.

The sensors can signal the wearer’s smartphone, which will flash a warning message to step away from the fridge.
I'm sorry, but is there a market for this product?  What woman  on this planet would listen to her phone when it tells her not to stress eat?
Smartphone: “According to the sensors in your bra, you are stressed out.  You should not eat.  Walk around the block, instead.”


Smartphone: “Pizza is not good for you.  Put down that pizza.  Now.”


Smartphone: “Your sensors indicate that your level of stress has increased.  Stop eating that pizza.  It is bad for you.  You will get fatter."


Smartphone: “PUT DOWN THE PIZZA, BITCH!”

And not a minute too soon.

I was about to give up the fight against my sagging bust!  I tried the Oyasumi Goodnight Keep Bra Bust-keeper, but frankly, it did not live up to my expectations.

I guess my girls were too much for it.  Gravity prevailed.

I’m hoping that will not be the case for the Oppai Taiso Breast Gymnastics Night BraBust Anti-Sagging pad.

I think it's a superior product. It’s for gymnasts.

Because we gymnasts typically have huge boobs.

It is a well-kept secret in the world of gymnastics, that a large bust can create havoc on the balance beam.

I can certainly attest to that.

In fact, my double Ds were my downfall in the 1984 Olympic games. 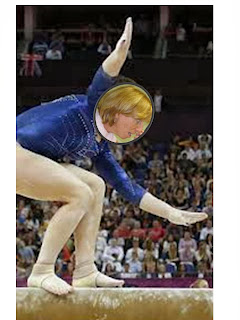 Gravity took over and another Mary Lou came from behind to become the first American woman to collect a gold ribbon in Gymnastics.

One can only imagine how different my life would have been had the Oppai Taiso Breast Gymnastics Night BraBust Anti-Sagging Pad been around when I mounted that balance beam back in the 1984 U.S. Nationals.

Gravity would not have prevailed, the 5 times it did.  I would have been as graceful as a gazelle, with the girls gathered tightly in place.

I most certainly would have beaten that bitch Mary Lou.

And it would have been me on the Wheaties Box. 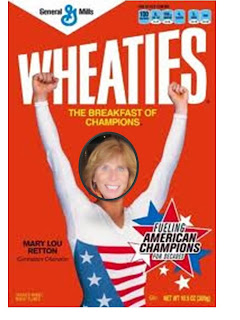 No use crying over spilt cereal milk.  I say better late than never!  I’m starting my training tomorrow.

It’s less than 18 months before the 2016 Summer Olympics.  Look out Brazil, here I come!

Me and my Oppai Taiso Breat Gynmnastics Night BraBust Anti-Sagging Pad.
Posted by Lou Clyde at 8:06 PM No comments: