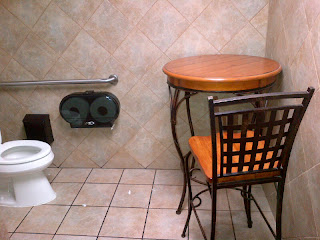 I had to look twice, too.
I was eating lunch at a very popular restaurant today.  (Let's call it "LaTrene's".)
I didn't sit at that table. I was in another dining area.
Well... technically, I did sit there. That is, the seat on the left.
And the entire time I was sitting there, I was thinking, "OMG. Where is my camera when I need it?"
I returned to my table (outside of the bathroom) where I was meeting with a group of women leaders from my company. They all know me as my work persona, and have no idea of my secret life as The Nerdling.
One of the women got up from the table. "Excuse me, I'm going to the ladies room."
"OOOOH!" I said, with a tad too much excitement. "Do you have your cell phone with you?"
"Yes, why?"   She was confused.
"Would you mind taking a picture of the table in the bathroom and emailing it to me?"
I love it when I can make a good impression.
I mean, really!  A table in a bathroom?

I heard of a restaurant in San Francisco that has a table wedged between 2 bathrooms. You are subjected to stereo toilet flushing and body cramps all evening.   But they give you a 50% discount for the ordeal.
I'm sorry, but I'd insist on an even deeper discount at LaTrene's.
So what does the LaTrene hostess say when there are no tables left in either of the dining areas?
"We're very busy tonight.  The only table we have left is a table for one. But if you don't mind mismatched chairs, we can fit two.
Posted by Lou Clyde at 7:41 PM 1 comment:

Email ThisBlogThis!Share to TwitterShare to FacebookShare to Pinterest
Labels: bad seats in restaurants 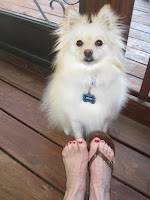 I did not just fall off of a turnip truck.

Clearly, my daughter Linda thinks I did.

How else could you explain the conversation we had on the way to the mall last Saturday?

“ I lost one of my shoes last night," Linda casually announced. She and her friend Katarina had gone Midnight Bowling the prior evening.

She showed me the orphan shoe, for which I had paid $40. I guess, technically I paid $20 for it. The other $20 was apparently MIA at, or around, Anchor Lanes.

"I'm sure you can get it back," I said confidently. "They must have a lost-and-found at the bowling alley.”

Checking Anchor Lane’s lost and found for her missing shoe was obviously something Linda did not want to be involved in. She switched gears.

"I may have left it in Cameron's car." 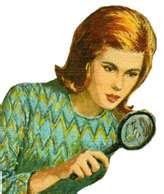 My left brain kicked into action. If that were the case, Linda would have either walked into the bowling alley wearing just one shoe, or she would have taken it off in his car after bowling.

"Hmmm.  Let's see.  Were you wearing only one shoe when you walked into the bowling alley?" I probed.
"No."
"Well, then...  Did you take your shoe off in Cameron’s car after bowling?"
"No"
"AHA!" I proclaimed, attempting (without success) to control my enthusiasm.  "Then how could it be in Cameron's car?" I asked smugly. 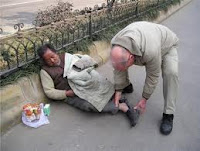 "I think somebody stole it."
"OH COME ON!” I said. “ That's the dumbest thing I ever heard in my life. Why would anyone steal one shoe?”
Katarina tried to help. "People steal one shoe all the time."

"I stand corrected. THAT'S the dumbest thing I've ever heard in my life. What good is one shoe?"

Then I added, in a voice a bit too loud for the car, "I did not just fall off a turnip truck!"

But you know what? I suppose if somebody had just one leg (a left leg), she might find Linda’s shoe to be of value. I mean, it was a very nice shoe (worth $20). And I may be wrong here, but I don’t think two legs are required to bowl.

So it is possible that a one-legged individual was bowling at Anchor Lanes on Friday night. And since size 8 is a relatively common shoe size, it’s likely that Linda’s shoe would perfectly fit a one-legged bowler’s left foot.

I think I’m being too hard on Linda.
Posted by Lou Clyde at 2:16 PM No comments:

Most people make this mistake just once in their life time. They learn their lesson.

I should have known better. I was driving down my street and saw my neighbor reaching into her mail box wearing what appeared to be a maternity top.

I rolled down my window and the 6 words flew out of my mouth, before my brain had the opportunity to restrain them. 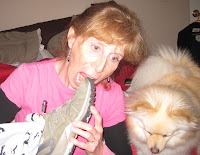 As the unfortunate words left my lips, Allison turned to face me. By the time the word “pregnant” had come out of my big, fat, idiotic mouth, I knew she wasn’t.

And her response was unnecessary.

Then my lips began to move again and random words flew out: “ … maternity…. top… flowy….”


Allison said flatly, “This is just a t-shirt”.

I mumbled, "It looked exactly like a maternity top," as I stepped on the gas and got the heck out of Dodge.

I felt AWFUL! I probably made her cry. I may have ruined her entire day...month...year!  She probably turned to alcohol or drugs to get over the trauma.

And believe it or not, it wasn’t as bad as the first time I made this mistake. Flash back about 25 years. I was in an elevator. It stopped and a co-worker entered, wearing a maternity top.

I said, “I didn’t know you were pregnant, Nancy!” 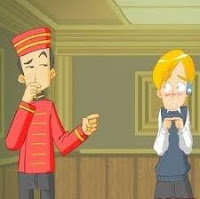 Then my IQ dropped to new lows.  I said, “GET OUTTA HERE!”  After she denied her pregnancy for the second time, I came to my senses and the random words flew out “maternity….top… flowy….”  It I was truly pathetic.

(Note: the picture to the right illustrates another form of elevator embarrassment,  which I have never experienced.  I am far too lady-like for such behavior.)

Getting back to my story... How could I have made that same egregious error twice in my life?

I can just see it!

Fast forward to 2037. I see my neighbor Betty in the bingo room at Murky Moments Retirement Home. Perhaps it’s a fan that causes her blouse to billow, or maybe she’s just eaten too many servings of banana pudding.

"Betty! I didn't know you were pregnant!"

Seriously. I don't know how I can ever face my neighbor again. And Kevin and I walk by her house EVERY DAY on our walks.

They don't call me a stinkin' genius for nothin'.
Posted by Lou Clyde at 8:38 PM 1 comment:

You may wonder how I got the idea to style my hair like a young Black girl.
I was inspired.
Not by a trip not to the Dollar Store, but to the Two Dollar Beauty Store next door. They sell all sorts of exotic products, most of which cost $2.00. ( Where else can you find a $2.00 toe ring next to $2.00 fake nails down the aisle from $2.00 glitter eye shadow?)
We had just left the fake eyelash section when I saw them: an entire wall of beads. In every shape and size. In every color of the rainbow.
They looked good enough to eat. I began my selection.
Then Linda noticed me.  "Mom, you can't buy those! They're for little girls." She looked over her shoulder and added, in a whisper: "little Black girls."
"But they're so colorful! Won't they'll look good in my hair, too?"
Linda walked away.
Then I remembered Bo Derek. 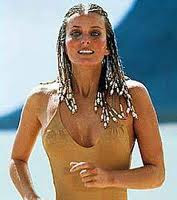 Bo Derek wore beads in her hair in the movie Ten and she was a 10 in that movie. I'm no Bo Derek, but I was thinking these beads would raise my score by at least a couple points. (Especially if I didn't run on the beach.)
I picked out a $2.00 set of multi-colored beads that looked like Skittles, and a $2.00 tool for putting them in my hair that looked like a cross between a crochet hook and a fishing pole.

I asked the Asian woman behind the counter if it was easy to bead one's hair. She looked confused, "Whose hair?"
"My hair!" I said enthusiastically. She looked at me with a strange combination of suspicion and pity, and quickly rang up my order, ignoring my question.
Coincidentally, Linda's friend Dynesha had dinner with us that night.   I asked her if she could help me style my hair like a little Black girl's. "MOM!" Linda screamed as she crawled under the table.
But you know what? I didn't need anyone's help. It was pretty self-explanatory. And my skittle hair looked awesome.  I don't know about you, but I think I sort of resemble Bo Derek in this picture. 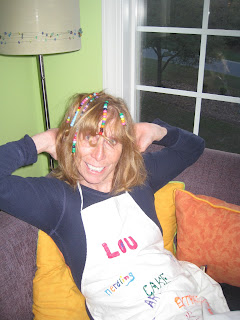