How to prevent a torn Rotator Cuff

How to prevent a torn Rotator Cuff.

Can you believe I have lived 39 years without owning a wine stopper?

How dare you question my math.

I’ve always just used the cork.  (Or the screw top.)

Now I have a fancy wine stopper.  Made of a rock.

Don't get me wrong.  It's a very pretty rock. From New Hampshire.

Truth be told, I never thought much about wine stoppers before.  But after examining my fancy new rock wine stopper I had a scathingly brilliant idea.

I can design my own!

But before I started designing my Nerdling Wine Stopper I decided to do my own research.  I mean, what’s worse than designing something that’s already been designed?

And I am FULL of good ideas about Wine Stopper design.

In fact, I can't believe I never thought of designing a wine stopper before!  My first idea was a banana wine stopper.  How fun would that be? 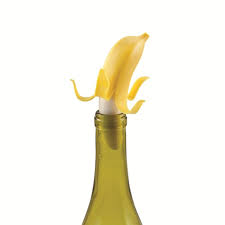 Oh well.  I've got a zillion more ideas.  Like a wine stopper made out of a giraffe.  They have long necks, just like wine bottles! 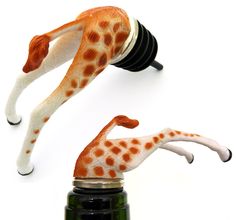 Certainly nobody has invented Chicken wine stoppers.  I mean, how fun would it be to stick a chicken's head into the top of your wine bottle!!!! 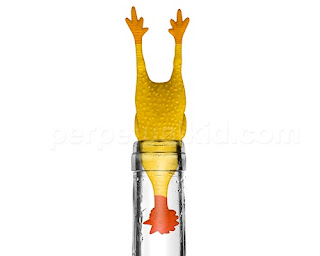 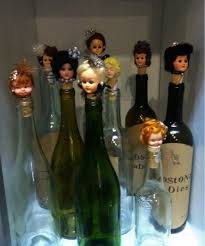 For crying out loud. Maybe I'll just stick my finger in the stinkin' bottle. 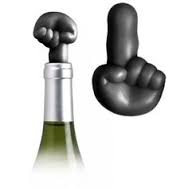 At least it's the pointer finger.

I guess the market for fun wine stoppers is pretty well saturated.  Unless... 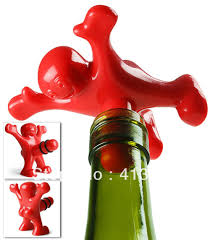 I’ve written before about the Clyde/Walt dissension regarding our  Kirby Vacuum Cleaner.  I love it.  Dave hates it. 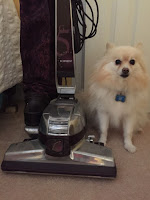 Much to my chagrin, poor Kirby has been relegated to the guest room closet.

And Dave keeps buying other vacuums.  That last only a year or two.

His latest investment is a Riccar.  He was excited because it came with a free hand-held vacuum.  Which broke this morning.  Already.  What a shock.

Being an engineering genius, I decided to fix it.

The first thing I did was plug it in.  Who knows?  Maybe Dave didn’t think of that.

I tried tuning it off and on.

Did I give up?  Of course not!  I set my laptop next to the deceased vacuum and googled, “Riccar SupraQuick won’t turn on”.

And I struck gold at fixya.com.

Apparently you just type a question into the box and connect one-on-one with a technician.  I wrote, “My Riccar SupraQuick won’t turn on.”   And there was a guy named Vacman waiting to help me! 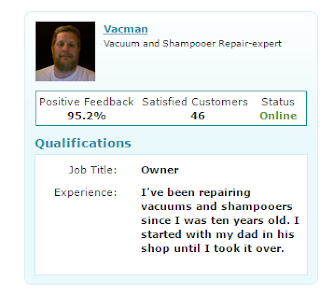 Vacman wanted to know if I’d be willing to pay $28 for an answer. When I didn’t respond immediately, he messaged me: “I am online right now and ready to work on a customized answer to your question”

I wondered if the cost would go down if I changed my question.  Besides, Vacman must get really sick of getting the same questions day in and day out.

So I posted: "I think my vacuum cleaner is haunted.  Can you help me perform an exorcism?" 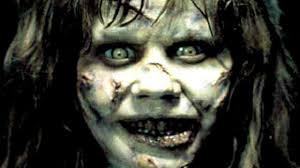 Unfortunately, Vacman gave the same response. Would I bill willing to pay $28 for my answer?  If he was going to charge $28 to answer the question, I wonder how much he would charge for the exorcism!

He again messaged me, “I am online right now and ready to work on a customized answer to your question.”

There's no way he was really online ready to work on a customized answer!

I submitted one last question.

"My husband got a new vacuum cleaner because he never respected my Kirby.  He said it was too heavy to haul upstairs.   I think it's despicable that he would replace a perfectly fine vacuum cleaner just because she is a bit overweight.  And guess what?  Now the free hand-held vacuum cleaner that he got with his new, younger, slimmer, Riccar won't turn on.  And it wasn't even 1 year old! My Kirby is nearly 20 and it always turns on. Do you have any advice for my marriage?"

Because it’s way easier to fix a vacuum cleaner than a marriage!

Vacman messaged me, "I am online right now and ready to work on a customized answer to your question."

I'm sorry I doubted you, Vacman.
Posted by Lou Clyde at 4:07 PM No comments:

"Tell me again what this class is?" Dave asked as we stepped inside the Marine Training room.

"It's about life as a Marine,"  I explained.  "It will help us understand what Linda will be going through in the Marines."  I told him they'd cover all the details that she (no doubt) paid no attention to: financial stuff, taxes, insurance, etc.

The facilitator began the class by asking participants to introduce themselves.

What started so innocuously, quickly evolved into an episode of the Oprah Winfrey Show.

Take the woman from New Jersey who asked for some advice.  What should she say to the woman who had carpooled with her and whose son now refuses to see her?  The mother was understandably heartbroken. 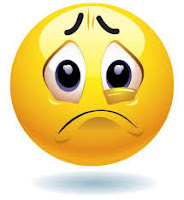 People began to sniffle.  Dave reached for the class handouts.

Then there was the big burly guy from the Bronx who told us he's cried every night since his only daughter left for Boot Camp.  His voice quavered as he described the emptiness of his home.

More tears were shed.  Dave rifled through the booklets.

Next came the single mother who doesn't know what she's going to do without her son who used to call her several times a day and drove her everywhere she went.  She has never felt more alone. 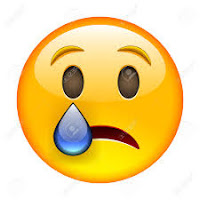 I pulled out a Kleenex.  Dave checked email on his phone.

When the woman from Maryland announced that she had a recurrence of breast cancer and was afraid that this would be the last time her Marine son would see her alive, the facilitator left the room and returned with a box of Kleenex.

She handed them out like appetizers at a dinner party.

This was not a class about Marine life.  It was a stinkin' support group for depressed family members of new Marines.

Dave elbowed me and said, "I thought they were gonna talk about the 401K."

We broke for lunch before we'd gotten half way through the introductions.

"Wasn't that sad about the woman with breast cancer?" I asked Dave over lunch.

"That woman with breast cancer.  You know...she's worried that tomorrow will be the last time her son sees her."

"Right after the woman talked about her son who called her all the time."

"Are you kidding?  After that guy from the Bronx started bawling his eyes out!"

Clearly, when the tears began, Dave started tuning out.

The facilitator covered the 401K and taxes after lunch.

That's when I tuned out.

When all was said and done, Dave got all he needed from the class.  He learned all about the financial aspects and nuts and bolts of the Marines.

But you want my opinion? 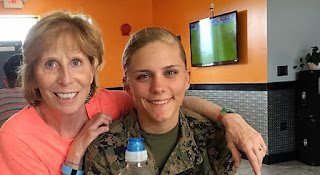 He missed the best part.