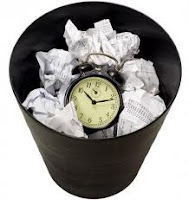 I hate wasting time.  And I waste 30 stinkin' minutes every day driving to and from work, sitting in my car.  Valuable time that could be spent analyzing data.
That’s an hour a day! 5 hours a week! 260 hours of lost analytic opportunity per year.  Nearly 11 Days wasted.

Think about the insights that have gone undetected. 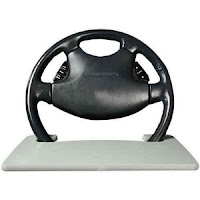 Before ordering my $19.98 AutoExec WM-01 Wheelmate Steering Wheel Desk Tray - Gray, I did my homework. There were 583 reviews on Amazon.com (some more helpful than others). 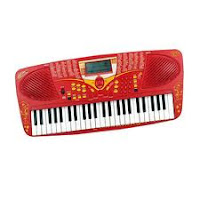 Wow!  I wonder if my High School Musical keyboard would fit on the AutoExec WM-01 Wheelmate Steering Wheel Desk Tray - Gray?
This one is not as positive:


This is the worst ironing board ever. Why would it not come with the cloth cover? There are scorch marks all over it, melted plastic everywhere and my clothes are tearing between the iron and the board.
Uh-oh!   Plus, it appears that the AutoExec WM-01 Wheelmate Steering Wheel Desk Tray - Gray has a serious product flaw:.


This thing needs to have non-slide padding or ridges. My peculator and butane stove slid off during a right turn and tossed everything into the passenger seat. My car seat is now completely stained and it ruined a perfectly good cup of coffee. Oh, and my wife got burned by the flames. We are considering litigation.
We live in such a litigious society.

I personally think this next review is a bit on the picky side:


Kind of difficult to take a quick nap when stuck in traffic. I can rest my head on it but it's not cushy enough for me to feel comfortable.
Come on!  Recline your seat if you want to nap while you're stuck in traffic.

I'm still scratching my head over this next review:
I read some 4 and 5 star reviews by those who used this device successfully to change a baby while driving. On that basis, I bought one. I put my baby on it and drove for over an hour. It did not change. Same baby. I am glad it worked for some people but I will be returning mine. (The steering wheel desk.) I don't know what to say about this:

I bought this laptop. I have never been so disappointed in my life. This laptop has no screen and no keyboard. There is no slot for a floppy, no battery, no mouse, no printer, no camera and no loudspeakers. There was not even an instruction book or a parts list. Just a slab of plastic.
I was still pretty much sold on the AutoExec WM-01 Wheelmate Steering Wheel Desk Tray, despite those negative reviews. But when I read this next review, I realized that the product could pose a safety risk. 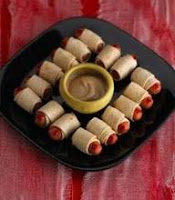 In several accidents that I have had whilst using this, the airbag causes the laptop screen to slam shut.  I've suffered several broken fingers because of this.
What?  I can't risk breaking my fingers!  How in the heck could I analyze data with broken fingers?

But I kept reading and, sure enough, other reviews offered solutions to the broken finger risk.

One person suggested: "boxing gloves provide excellent finger protection and might just be the thing you are looking for."
I suppose that could work.

But as a back-up plan I could always disable my airbag.

I probably shouldn't have taken Kevin for a walk right before the show, but I had my make-up on, my hair was done and we had 15 minutes before vocal warm-ups. What could possibly go wrong?

We were about 2 blocks from the theater when Kevin decided to poop.

He assumed "poop position" in the grass.  I waited patiently. Then he jumped out of the grass like he'd been standing in a fire ant hill and started running in a circle.

Kevin moved to the middle of the sidewalk and resumed his position.  I tried to be patient. Minutes passed.

I decided to lift his tail and take a peak.

"Kevin-push it out!," I encouraged. I waited a few more minutes.  Nothing.

I took another look. He was giving birth to a reluctant turd.

All I could think about was the costumes. Three of the four people who hold him onstage are dressed entirely in white. This was serious!

Plus the clock was ticking!

"We have vocal warm-ups in 5 minutes, Kevin!" I reminded him. He looked over his shoulder at me pathetically.

A man walking down the street stopped to look. "You can't rush him" he advised.  "Thank you," I said politely.

(and under my breath, "What are you, a stinkin' dog protologist?")

I took another look. It was so close to being delivered. All it needed was a little nudge.

I considered using a stick, but reconsidered.  It couldn't be a messy delivery, with all those white costumes.  It had to be clean.

I reached in my pockets in desperation.  I found a Kleenex.

I took a deep breath, lifted his tail one last time and removed the troublesome turd.

Kevin immediately started prancing back to the theater as if nothing had happened. He actually looked back at me as if to say, "Hurry up, we have vocal warm-ups in 3 minutes." 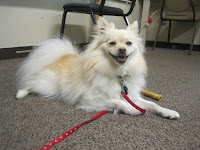 There I was, holding the leash in one hand and a Kleenex full of dog poop in the other.  I finally found a trash can and returned to the theater, a bit less composed than I had been at the start of the walk.

In contrast, Kevin was completely relaxed.

But most importantly, the costumes escaped completely unscathed.

Oh What a Tangled Web