I didn’t hesitate for a minute when I saw the Drinking Buddies Drink markers. 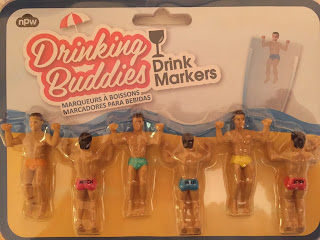 Six miniature men with names engraved on their Speedos. 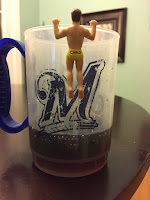 I slipped one on Dave’s Diet Coke.  “What the hell is this?” he asked.


“I don’t want that hanging on my glass,” he said as he handed him back to me.


“You want Mitch, instead?” I offered, beginning to amuse myself.


“I hope you didn’t pay money for those things.   What are they for anyhow?”


“Drink Markers.  So we don’t get our glasses mixed up.” 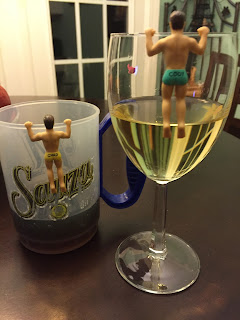 “Oh, really”, he responded, “Do you really think that's necessary?”

He just doesn’t know how to have fun.  I started assembling the guys around the top of my wine glass.  They were all looking into the glass. 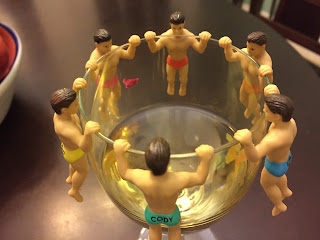 Which inspired me.  I have a denture ice cube tray.  I can hear Brad now, "Look, Josh!  Is that somebody's false teeth floating in Lou's wine glass?"


Or maybe my fake fly.  Like Alanis Morisette: A fly in my Chardonnay!


These guys are so much fun!


Maybe there should a shark in the glass.  And they're terrified.


Or, I know.  They're in a Bruce Willis movie, suspended high in the air.  And they're hanging on for dear life. 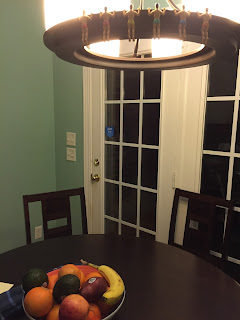 
Whatever they’re doing has to match their expressions.


But Chad, Mitch, Ryan, Brad, Cody and Josh are all wearing their poker faces.


“You didn’t answer my question,” Dave said.  “Did you actually pay money for those things?


Bah.  He just doesn’t know how to fun. Thank God there's someone else in the house who values my Drinking Buddies. 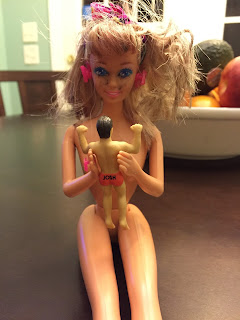 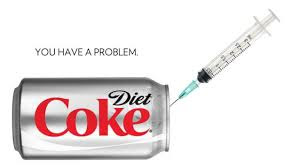 And I thought kicking my heroin addiction was hard.

It was way easier than getting off Diet Coke.

OK, so I was never a heroin addict, but I know, IF I HAD been addicted to heroin, it would have been a lot easier to kick than stinkin’ Diet Coke.

In fact, my body is in such turmoil over the missing gallons of Diet Coke, it hasn’t even noticed that I’ve had no wine since midnight on Sunday.  Or sugar.

And that I’m eating vegetables.  And fruit.  And nuts.

It’s all part of this wack-a-doodle diet my sisters rave about.  It was Jean Anne, who weighs less than a Cocker Spaniel, who discovered the Abascal Way, which is all about reducing inflammation caused by what you eat.  Apparently, when inflammation is quieted, people begin to feel better.

I used to feel better.  Before I stopped drinking Diet Coke.

Actually, before my trip to Hi-Wire.

In case you didn’t know, Hi-Wire is a trampoline park that has ambulances and TV lawyers parked at its front doors.  A couple weeks ago I fell off a high wire at Hi-Wire. 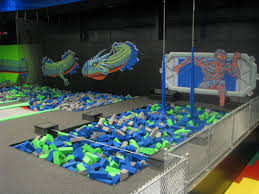 OK, maybe it wasn’t that high.  But it was a wire.

OK, maybe it was more like a balance beam.

So, I lost my balance and fell, miraculously missing the hundreds of foam bricks beneath the beam.

Instead, I landed on the rim of the foam pond, which is protected by padding the width of 2-ply toilet paper.

I braced myself for the fall using my hand, which caused an excruciating jolt that ran from my wrist to my shoulder.  My hip landed squarely on the edge of the pond, leaving me with a bruise the size of South America. 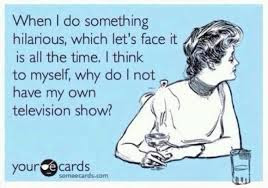 The bruise faded, my wrist is fine, but my shoulder still hurts.

It’s inflamed. Which brings me back to the Abscal Way.

I started the stupid diet on Monday morning, which was Martin Luther King Day, a holiday from work. I slept in. I hardly missed the Diet Coke.

But when the alarm went off at 6:00 the next morning my head was throbbing.  As if I’d consumed 6 glasses of wine and a 12-pack of Labatt’s the previous night.  I popped two Tylenol, some blueberries and nuts and headed into work.

At 9:30 a client came in my office and began to talk to me.  I noticed that her lips were moving.  After a few minutes they stopped.

Was it my turn to talk?  Maybe another blueberry would help.

I popped one into my mouth, swallowed, and said, “You were saying?”

The day got worse.  After my lunch of vegetables and an apple I began to fade again.  I seriously considered crawling under my desk for a nap.  But that would have been too tempting. 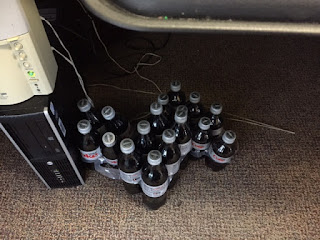 You know what?  I'm gonna do it.  Why?  Because I am not your ordinary Diet Coke addict.

When I set goals I achieve them, damn it!

And if I want to stop drinking Diet Coke I WILL SUCCEED.

But then again, I am also sensitive to my own needs.  And if I want a cold bubbly Diet Coke. 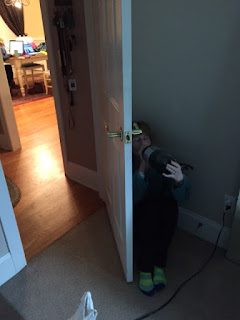 It's my own damn prerogative.
Posted by Lou Clyde at 7:02 PM 1 comment:

Most people sit at their desks. 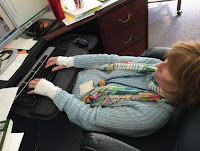 My re-purposed trash can serving as an ottoman, I lie nearly prone in my desk chair each day. Writing SAS code.

And I suffer.  Most days I leave the office with deep indentations on my legs, just above my heels.  From the edge of that damn trash can.

I've tried to stay vertical.  God knows how I've tired to force myself to sit up straight while studying statistics.

I begin each day erect, but gradually sink deeper and deeper into the chair. On my Clyde slide. Until I can barely see data anomalies over the keyboard.

I thought about inserting Jiu Jitsu knives along the edge of my trash can.

But that would be so messy.

So imagine my delight when I discovered a cure for my recumbency on the Japan Trend Shop website.  I am pleased to announce that my horizonal work life days are numbered, thanks to The Chin Rest Arm – Office Posture Gadget. 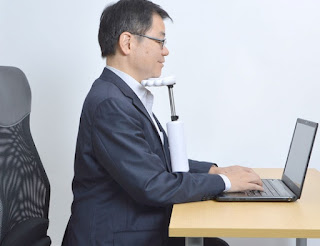 And here’s the fun part.  According to the marketing copy, "the soft materials cushion your chin or cheek, so you can covertly get some sleep at your desk all the while you appear to be looking at your screen." 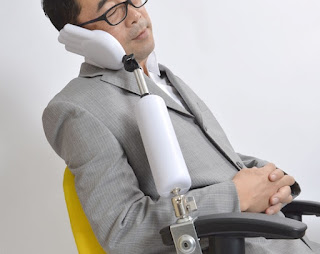 Wow!  I can exhibit great posture and nap in my office.  Simultaneously!!!

But $73, plus shipping and handling, is a wee bit out of my chin rest posture gadget budget.  I decided to make my own.

I studied the gadget.  What I really needed was a prosthetic hand.

But I didn't have a damn prosthetic hand.  The only fake body parts I had were my fake head and fake leg. 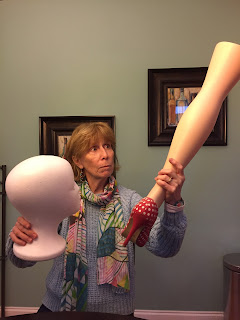 Others fledgling inventors may have given up at this point.  But I'm not the your ordinary inventor.  I'm a Nerdling inventor. I think out of the box.

And hands are not that different from feet, right?

I mean, at the risk of getting overly technical, they each have 5 things poking out the end, right?  Toes...fingers...what's the difference?

Why couldn't I put a glove on my leg's foot?

I pulled out a ski glove. It fit like Cinderella's slipper.

And it works!  Check out my posture!  It's impossible to slink down into my chair with my Nerdling Chin Rest Leg Arm holding me upright! 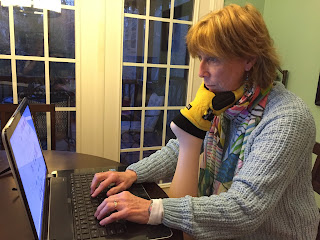 But will it pass the true test? 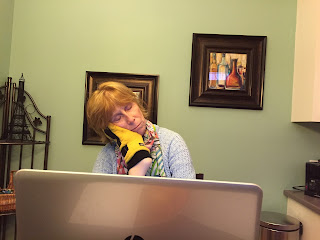 Kimmy had just complemented Kevin on his pooping etiquette when the trouble began.  “He really is considerate in picking his spots,” she bragged.  I agreed, as the three of us watched Kevin find a remote patch on the U.S.C. Campus and assume pooping position.

He finished, and as  I pulled out a bag to clean up after him he abruptly resumed pooping position about a foot away from his original optimal spot.

“What?” asked Luke, who is relatively new to Kevin’s elimination enterprises.

“He needs more time,” I explained to Luke.  “It’s another reluctant turd.”

The three of us stared at Kevin, who looked away, embarrassed.  He then managed, somehow, while maintaining pooping position, to turn his body 15 degrees clockwise so we were no longer looking at him head on.

The pressure gets to him.  (Pooping is not a spectator sport.)

The three of us turned our backs and sat down to give him a bit of privacy.  After several minutes I looked over my shoulder.  Kevin appeared to be done.

“Good boy, Kevin!” I said and we all stood.  Kevin walked a few steps and resumed his pooping position.

I sighed, getting impatient.  “Come on, Kevin,” I urged.

But apparently that was a bit TOO MUCH PRESSURE ON POOR KEVIN’S SENSITIVITY and he sat.

But it was too late.

I had a Kleenex in my pocket that I used in a valiant attempt to clean up.  And, to be clear, using that Kleenex on his tail was like putting out a stinkin’ forest fire with an eyedropper of water. 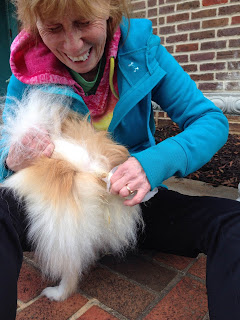 “Crap!” I said, ironically, emptying my pockets.  “No more Kleenex.”

Kimmy suggested I use one of the plastic bags.

However, I’d lost my composure by then and, in all the excitement, I didn’t consider putting my hand inside the bag.  Rather I folded the bag in half and incompetently dragged it down Kevin’s #%*$  fur trying to slide the  #%*$ off the ends of his filthy fluff.

Except somehow the bag slipped away and with horror I realized my bare fingers were sliding through fluffy poo.

But Kevin was feeling liberated.

The rest of the story is rather anticlimactic.  I wiped my hands all over the grass to clean off the #%$@& – as best I could-  and we went in search of a bathroom.

We wandered through the deserted campus (it’s winter break), Kimmy holding the leash. Because it's impossible to hold a leash with jazz hands.

We ultimately ended up at a downtown theater that was rehearsing for an upcoming show.  The cast was oblivious to the real drama occurring between the lobby bathroom and the front porch. 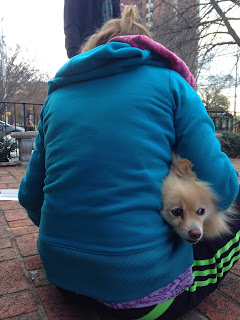 Where poor Kevin was enduring a sponge bath.  Using wet, soapy paper towels from the bathroom.

After nine trips in and out of the lobby bathroom Kevin's backside was relatively clean.

But we still had to get home.  In my car.  And nobody wanted Kevin to sit on their lap.

In the end, I won drove.  Kimmy remembered the bag of Good Will clothes in my trunk and pulled out a shirt to cover her lap on which Kevin parked his mostly clean, soapy butt for the drive home. 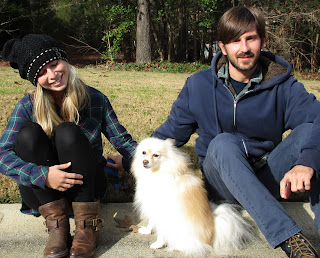 Never pressure a pooping Pomeranian.
Posted by Lou Clyde at 9:02 AM No comments: