I have been listening to David Sedaris' Live at Carnegy Hall CD in my car this week. The CD included a story he wrote about Stadium Pal, "the discrete portable restroom system for men". It's basically an external catheter worn like a condom. As David Sedaris described his trial usage of the Stadium Pal, I found myself laughing so hard in the car that I could have used one. (But since I don't have a penis, that would not be possible.)

When I returned home I decided to see if this story was fiction, or if there really was such a product. I googled ''Stadium Pal'', hit "I feel lucky" and found myself at www.biorelief.com.

Not only is Stadium Pal a real product, but there is a female version of it: Stadium Gal.

I feel it is my duty, as the Nerdling to sample products for my readers. The convenience of the product is a definite plus for me, given my pea sized bladder. On the other hand, having a Stadium Gal would significantly reduce my step count, and getting 11,000 steps a day is important to me. But after reading more about the product details, I regret to say I will not be test driving the Stadium Gal. 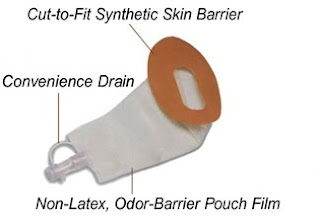 Let's start at the top. The Urinary Pouch looks a bit clunky to me. It apparently stays in place with adhesives that are provided. Considering that tearing a band aid off my arm brings tears to my eyes, I cannot imagine removing the Stadium Gal Urinary Pouch after a long football game.

It's one thing for a man to have a bulge in his pants, but I don't want any rumors circulating about me. The Stadium Gal is advertised to be 'totally discrete, completely hidden beneath loose fitting jeans or pants', but come on! Parachute pants went out of style in the 80s.

Aside from the collection area of the system, the Stadium Gal works just like the Stadium Pal. It has the same Convenience Drain that connects to the leg bag system (worn on the inner calf). I suspect that they had some problems with valve crimping in the Stadium Pal system, but no worries here! The Gal has a softer material that eliminates valve crimps (and possible septic system back-ups). 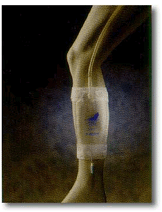 Nope. I will not be trying out the Stadium Gal.

But I won't let you down, readers. While doing research for the Stadium Gal I came upon a product that I am willing to test drive: the Wine Rack. It's similar to the Stadium Gal, but at the other end of the assembly line, so to speak. It's basically a sports bra with a hidden polyurathane bladder that holds up to 25oz. of your favorite beverage that you drink through an attached drinking tube. According to the promotional materials, "The Wine Rack will turn an A cup in to double Ds and sport your favorite beverage for yourself and your friends"

I was originally going to write this week's blog about hankies. You may think this is a bad topic for my blog, but it snot. (Sorry, couldn't resist!)
My Dad carried one his whole life (well, not the same one), as did just about all men of his generation. He lived in a pre-germaphobe society with no hang-ups over blowing your nose into a cloth and reusing it throughout the day. Users had no second thoughts about putting snot filled hankies into washing machines.
Men's hankies were typically large white squares of cotton fabric that were folded up and stuffed in their pockets. Women's 'handkerchiefs' often had embroidered edges and flowers. Some were monogrammed. 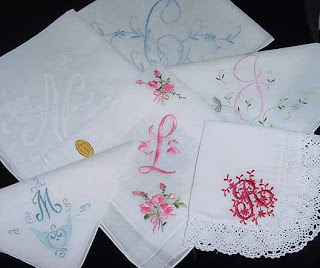 I ask you. Who would want to blow their nose into one of these? "Ick".
When I was a kid, I honed my ironing skills on my Dad's hankies. In fact, most of his hankies had brown triangular stains on them as a result. And I could make my Dad's hankies dance. Know how? By putting a little boogie in them.
Pa-dum-dum.
As I was researching this topic I discovered that the history of Kleenex is a much more interesting topic than hankies.
In the 1920's, one of Kimberly-Clark's products was Kotex (without adhesive strips, as we all know). Because the topic of feminine pads was taboo, they were not able to successfully market the product and had an excess inventory of 'creped wadding'. They looked for another use for this fluffy material and in 1924 they developed a socially acceptable sister product they called Kleenex, which was positioned as a disposable cloth to be used for removing make up with cold cream.
Leave it to consumers to develop their own use for the product. By 1926 Kimberly-Clark began receiving letters from customers telling them that they used Kleenex as disposable handkerchiefs. The light bulb went off and the rest is history. Kleenex is now the number one facial tissue in the world and hankies are all but obsolete.
Thank goodness. On a related note, do you know the difference between boogers and broccoli?
Kids don't each broccoli.

But I'm certain as the square root of 64 is 8 that I wouldn't like Liver pudding.
It's been 24-hours since the shock and I still cannot get that unsettling menu item off my mind.

There is something seriously wrong with the concept of Liver Pudding. This is 2010. We do not live in a little house on the prairie with Charles Ingalls.

But I had to rise above it.  I am a nerdling, and with that title comes the responsibility to educate my readers about things such as Liver Pudding. With great discomfort, I researched the recipe for this ‘delicacy’.
I wish I hadn't.
Basically you cook pork liver along with a ‘thick fatty pork chop on the bone’. Then you grind the meat into submission, season it, press it into a loaf pan and refrigerate for 24 hours until it looks like Spam.
The recipe didn’t say, but I would recommend that you serve Liver Pudding with Mastadon drippings and mashed turnips. For dessert, try some delicious vinegar pie. Be sure to wash down the meal with a tall glass of ice-cold blood.  (And if you enjoy Liver Pudding you can also try Stewed Jackrabbit & Dumplings.)
Seriously!  It's time to call the Pudding Police. Making pudding out of items found behind the butcher counter should be outlawed. And, in all fairness, serving Mint Chocolate Chip Cheeseburgers should be a misdemeanor. 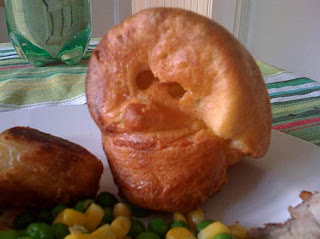 But if you ever become so bold as to serve Yorkshire pudding with Susan Boyle's face, you are headed straight for death-row!
Posted by Lou Clyde at 5:52 PM 2 comments:

I try to avoid work topics on my blog but this was just too tempting to ignore.
I was invited via e-mail to present some research results at a client’s staff meeting. Here is the string of e-mails:
TO: Lou
FROM: Emily
Good Afternoon –
Patrick would like you to speak at his next staff meeting . The meeting is scheduled for Thursday, May 27 in E159 from 8:00 am – 4:00 pm. Once the agenda has been completed we will send it out to everyone.  Thanks.
TO: Emily
FROM: Lou
I’m free except for between 10:45-12:00.
Thanks-
TO: Lou
FROM: Emily
Hi Lou –
How much time do you need? I’m putting together a tentative agenda to send to the presenters and I wanted to give them something to work with. Please let me know as soon as possible. Thanks for your help.
TO: Emily
FROM: Lou
30-45 minutes
Thanks!
TO: Lou
FROM: Emily
Hi Lou-
I got you down from 11:45 – 12:00…I hope that’s fine.
TO: Emily
FROM: Lou
I’m confused.
I told you that I was free all day except from 10:45-12:00 and that I needed 30-45 minutes.
Why have you put me down for 11:45-12:00?
Thanks-
TO: Lou
FROM: Emily
Sorry, I miss understood. I will move some things around.
TO: Emily
FROM: Lou
No problem. Thanks!
TO: Lou
FROM: Emily
I’m sorry, but I assumed you would be presenting the information for us when in fact, Herman Munster (alias)  will be presenting that piece, so we won’t need you to present after all. Thanks you for your willingness and sorry for the confusion.

For some reason, Emily Latilla's voice comes to mind.  (Click on the link below:)
http://www.youtube.com/watch?v=V3FnpaWQJO0
Posted by Lou Clyde at 5:05 PM No comments: