One of my greatest talents (not counting jumping rope on a pogo stick) is folding fitted sheets. Most people I know, especially my husband, just kind of roll a fitted sheet into a rectangular ball and pretend that it's folded neatly.
I, on the other hand, can take a fitted sheet and fold it into a perfect rectangle. And, at the risk of sounding pompous, it is sometimes difficult to distinguish the folded top sheet from the fitted sheet when I'm done with my magic.
I've tried hard to find an audience for my talent. My family is tired of my demonstrations. They accuse me of showing off. Bah.
I have not ruled out the possibility of being cast in a play which will allow me to showcase my skills onstage (as was the case with the pogo sticking jump rope shtick in Gypsy). The obvious play would be "Leave It to Beaver, the Musical", but it hasn't been written yet.
Maybe I should write it!
Or at least the scene showcasing my prowess at fitted sheet folding.

June (looking disappointed): Beaver, I thought I asked you to fold your fitted sheets.
Beaver: I did, Mom.
June: It doesn't look like they're folded. It looks like you just rolled them up in a ball.
Beaver: Gee, Mom. I tried hard. Ask Wally!
Wally: Gosh, Mom. I think he was trying. It looked like he was going to hurt himself he was trying so hard.
Eddie: Gee, Mrs. Cleaver. I don't know anybody who can fold fitted sheets as well as you. Could you teach us how to do it?
June (to the tune of "Be our Guest"):
"Folding sheets, fitted sheets, makes a woman's life complete!
And it's not that complicated
You just have to concentrate!"
You know, I better not share any more of this intellectual capital, since it is on the internet and can be easily plagiarized.
On second thought....
Do you think Sondheim might be interested?
Posted by Lou Clyde at 7:36 PM No comments:

Refusing to Throw in the Towel!

They made it look so easy!!

And it probably would be if I had 6 hands. But I only have 2. And these 2 hands are having a very difficult time making lizard out of a towel.

Being the nerdling that I am, I purchased a how-to book on towel origami when I was on a Carnival cruise a few years ago. The book looked simple, with step by step instructions for making anything from a scorpion to a sitting elephant. From an iguana to a dinosaur. From a lobster to a parrot.

And since we have company coming for the holidays, I decided to dust off my towel origami book and make a creature to greet my guests.  What a hostess!

I opened the book.  I noticed that every creation starts with a Main Body: A, B or C. The lizard I was making required Body B. I turned to the instructions.

Step 1. Roll tightly each side width-wise to center.

Easier said than done. Rolling a 30-inch wide towel tightly with just 2 hands is physically impossible. I used my chin. I used my knee. I used a bottle of wine and some straight pins.

I was covered in sweat when I finally completed step 1.  And I could have used a glass of wine, but my bottle was otherwise occupied.

Step 2 was a lot easier than step 1, but I had to use my teeth to pull the towel corners out of one of the rolls. I lost a fingernail in step 3 and it didn't look at all like the drawing. In fact it looked like a vagina. Step 4 had me so confused that I decided to abort the mission.

I felt like a failure. I didn't know that you had to be a rocket scientist (with 4 or more hands) to make a towel lizard.

That's when I decided to invent my own towel animals.  I poured a glass of wine and let my creative juices flow.

I started with the vagina I had folded in Step 3 (of main Body B). I made a head out of a dish cloth, added a do-rag and some antlers. It needed something else. Well, since I didn't need to read my towel origami book any longer, I donated my glasses to the creation. 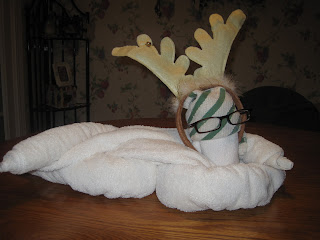 I'm not exactly sure what species of animal it is, but I believe it's either an amphibian or a mammal.

Thanks a lot, Mom. 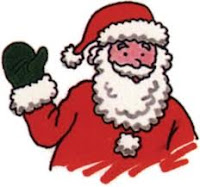 It all started in church about 17 years ago.

My 5-year old daughter Kimmy tugged on my sleeve and asked, “Is there a Santa Claus?” I leaned down and whispered, “We’ll talk about it later.” She insisted, “Mom, tell me! Is there a Santa Claus or not?!”  I didn't know how to answer.  I was in church. You’re not supposed to lie in church. The minute I said ‘No’, I knew I’d made a mistake.

When we got in the car she said, “I suppose you’re going to tell me that there’s no Easter Bunny or Tooth Fairy, either.” Technically, I wasn’t in church anymore so I told her that the Easter Bunny and Tooth Fairy were both, in fact, very real. “And I was just kidding about Santa. Wasn’t that funny?!!”


But even at 5 years of age Kimmy saw through me. She squinted her eyes at me and said, “Thanks a lot, Mom.”


I felt terrible and I made up my mind to do a better job of lying to my kids. Kids grow up fast enough. There’s no reason to rush things!

That, of course, came back to bite me.


First there was the tony nail thing. I thought it was so cute that Kimmy called toe nails ‘tony nails’ that I never corrected her. (And in my defense, she never asked me in church.) When she was about 10 years old she told me she had gotten into a fight with her best friend. “Brittany told me that my tony nails are called toe nails, not tony nails. Can you believe that? I told her she was a liar. She’s stupid, isn’t she?”

Let’s just say Kimmy was not happy with me when she found that Brittany was right. Again I heard, “Thanks a lot, Mom.”


Then there was the whole “punctuation” thing. I decided that I’d wait as long as I could to tell Kimmy about periods.

I dreaded that conversation. I mean, how do you tell your daughter that in a couple years she would spend one week a month bleeding? (Oh, and by the way, for the first day or so you will probably have cramps. Did I mention PMS… and bloating? But don’t worry, this will only last for 40 years or so.)

I planned it out perfectly. My husband dropped Kimmy off at my office one day and we went to lunch together. I tried.  Oh how I tried.  But I could not find a way to drop the p-bomb.  Every time I tried to bring it up I chickened out. I felt like a complete failure when at the end of lunch I had not even broached the subject.

But God was looking out for me. We went to the ladies’ room after lunch and while Kimmy was washing her hands she glanced at the tampon machine and said, “I don’t get it, Mom. Why would anyone pay 25 cents for a napkin when paper towels are free?”


Talk about a segue!

“Now that you mention it, there’s a very good reason for doing that! Let me explain.”

Every now and then I come across a product that is absolutely perfect for me. Of course the Wine Rack was one of those products, as was the Bump It, and, of course, who could forget those Dust Mop Slippers? So, just imagine my excitement when I happened upon an ad for Bling String Hair Extensions. 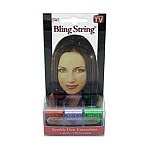 According to the advertising, Bling String Hair Extensions are the perfect way to dress up and add sparkle to your hair! "It's the do-it-yourself styling sensation that lets you add flair to your hair. You just weave them into your hair and show off your sparkly side."
My sparkly side!!!  (That's my best side.)
But there was one teeny tiny problem. My favorite store, the "Sold only on TV Store", did not have any Bling String Hair Extensions in stock.
But did that stop me? No!   I knew there had to be a way to make your own Bling String Hair Extensions at home. I really wanted to show off my sparkly side.
I started by doing what I do best: research.  I watched the "Bling it On" video on You Tube, where a girl demonstrates attaching Bling String Hair Extensions to her mom's hair. It looked like the Bling Stings were no more than blingly strings. No problem for the nerdling!  Time to go shopping.
Destination: Hancock Fabric Center where I found some very blingy thread in a variety of twinkly colors. I purchased the purple.
But before I went home, I stopped at Michael's. I needed a bling string back-up plan.
And it's a darn good thing I did. The purple blingy string was way too subtle. You couldn't see my sparkly side without an electron microscope. 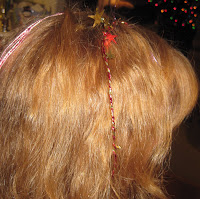 Time to go the back-up plan. I took out the less subtle blingy string from the Michael's bag.  I tried a couple of the items that I'd purchased.
But I still felt like the bling strings were not worthy of my head.  I needed something a bit more... well, a bit more me!
I had just one more item in the bottom of my Michael's bag. When I pulled it out I felt a bit nostalgic, as memories of Brownie day camp flooded my mind. 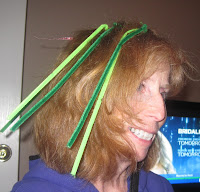 And much to my delight, the Pipe Cleaner Bling String Hair Extensions looked fabulous!  I could hardly take my eyes off them!
And they certainly show off my sparkly side.
Posted by Lou Clyde at 8:00 PM No comments: