I’m playing the role of “speaker” at an Analytics conference next week and need to find just the right costume.

(One that convinces the audience that I know what I'm talking about.)

As you would expect, I have a variety of nerd tops to chose from: 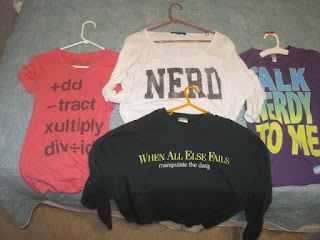 But I’ve been told that the speakers' dress code is “business professional”.

The audience will be a bunch of nerds!  I think they would appreciate my nerd wear.

So I tried hard to "make" each of these tops work with business professional bottoms. 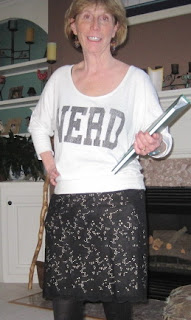 OMG. That skirt completely ruined my adorable nerd shirt.  I tried another combination: 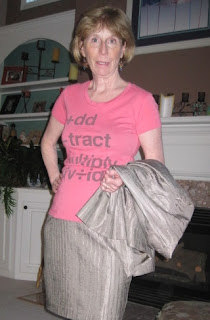 For crying out loud!

My add-subtract-multiply-divide shirt looks SO MUCH BETTER WITH JEANS than that pencil skirt!

I finally gave up and found a non-nerdy business professional "costume" in my closet. 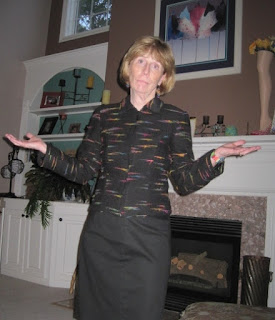 Then I had an epiphany.  I can still wear my nerd gear.  And when the analytic fashion police aren't watching?
. 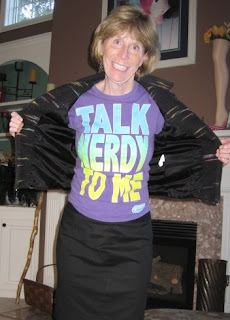 I can flash the audience!
Posted by Lou Clyde at 6:17 AM No comments:

On Monday I went to an audition for Nice Work if You Can Get it.

I owed it to my fans. 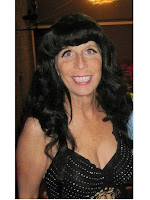 You see, it's been a while since I last appeared on the Town Theatre stage, playing the role of Mi Ho, the sexy prostitute who upstaged all the other Hos in Miss Saigon.

Although the part I was auditioning for in Nice Work did not require dancing, I brought along my tap shoes.  I wanted the director to recognize my triple threat-ness.

After the vocal auditions, the director (let's call her "Shannon") called us up to the stage for some choreography.  I enthusiastically grabbed my tap shoes and joined the others on stage.

At this point, I'd like to provide you with a demographic profile of the other auditioners.

Eighty-three percent were female and the median age was 21.5 years.  Every last one was stinkin' adorable and they all had perfect teeth.

Shannon joined us on stage and began to teach the routine. 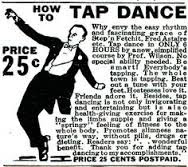 We actually performed in a recital at the Koger Center.  We were the only adults performing in a showcase with approximately 87 different dance numbers performed by thousands of children.

All of whom were more advanced than we were.

For weeks after that recital I would be stopped at work by people asking, "Did I see you...?"  It was so embarrassing disruptive I had to wear a disguise.

Back to the choreography.  Shannon said, "Everybody ready?"

"You bet!" I said enthusiastically.

I looked around.  Hovering in the shadows upstage, not unlike flashers in a dark alley, were the non-tappers.  I casually took a few steps in their direction.

Shannon looked at us and said, "Here's the non-tap version for those of you not tapping.  A-one-two-three double shuffle, leap - hop shuffle, flap, jump, pullback pank right one-two double toe punch.  Got it?" 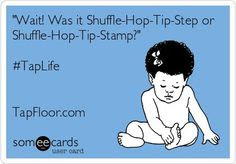 "Sure!" I said as I started my shuffle step right.  Shuffle step left.  Hop.

Those damn tappers were tapping so loudly I couldn't concentrate!!!

Then I had an idea.

If I could just make my tap shoes tap IN TIME... I might be able to fool Shannon.  Because I've got amazing rhythm (for a middle aged white woman).  It would be just like playing drums!

Then I realized that I wasn't wearing my tap shoes.  I had accidentally brought my character shoes that look exactly like tap shoes without the taps.

OMG!  How could I play tap drums without my tap shoes?

Shannon must have read my mind.  She announced that if you're smiling really big, the audience will not even notice your feet.

She then split us into groups of 4 to perform.  And I put the on biggest, goofy-ass grin I could muster and started tapping like I knew what the hell I was doing. 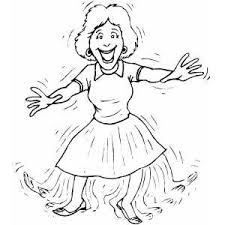 We ended the routine by throwing our arms up in the air.

(My ending was so good I need to see a Chiropractor.)

As I made my way off the stage I decided to really impress Shannon.  So I did a little pull back pank right and landed in the splits.

There was no need to upstage all those twenty-somethings.

Email ThisBlogThis!Share to TwitterShare to FacebookShare to Pinterest
Labels: auditions, Miss Saigon, Nice Work if You Can Get It, recitals, tap dancing

As many of you know, I am a Buffalo Bills' fan. 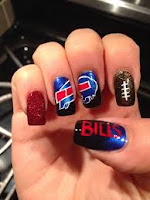 But my sister Jan puts me to shame.  She is a real Buffalo Bills' fan. (She knows more about the Bills' roster than I know about my husband.)

So I decided to make her a Two-Tone Fleece Team Headband that she could wear while pulling her hair out during penalty ridden games.

I found the free instructions for the headband in a Hancock Fabrics magazine.  (The photo below is of the One-Tone variety.) 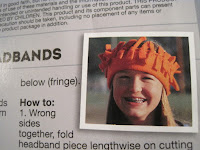 According to the instructions, the skill level for this project was "beginner".  Which was a slam dunk for me, considering I've been sewing since I exited my Mom’s womb numerous decades ago.

And at the risk of tooting my own horn, I actually stitched up her episiotomy tear on my way out.

That’s how good I am.

I reviewed the instructions. 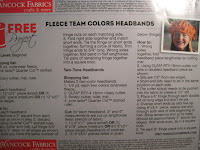 I had all 4 items on the shopping list, including the June Tailor Quarter Cut Slotted Ruler.  (I mean, who doesn’t have one of those laying around the house.)

I read those instructions several times before realizing that the "91)" was probably supposed to be (1).

Clearly, this was going to be a long afternoon.  I popped an Advil and valiantly picked up the instructions. 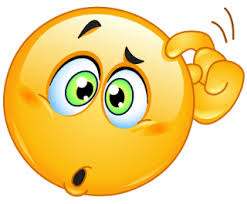 Was there supposed to be a chart below called "Fringe"?  Because there was no chart below.

1).  Wrong sides together, fold headband piece lengthwise on cutting mat.  OK.  I’m with you.
2). Cut slits in doubled headband piece as shown.
As shown?  Shown where?  Next to my friend Fringe, the chart?

*slits are ½” from raw edges.  But how long?  How many slits?  In what direction?  I bet the answer lies in the "shown below" that’s not shown below freakin’ anything!
*Place a 6” fringe through each double slit on long edge but don’t tie yet.  Where did the 6” fringe come from?   Was that in the #$#^%@* Fringe Chart?

I was ready to cut some fringe in the shape of a noose and suspend myself from the nearest ceiling fan.

I took a closer look at the photo of Two One-Tone Fleece Team Headband.  I realized that it was actually kind of goofy looking.

Why would the heck was I trying to make that goofy headband?

I poured a glass of wine to get my creative juices flowing.  Because I don’t need no stinkin’ beginner pattern from Hancock fabrics to make a Buffalo Bills headband for Jan!

I rolled up my sleeves and got to work. 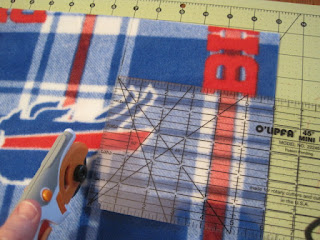 And within 30 minutes I had completed my very own Nerdling Two-Tone Fleece Team Headband. 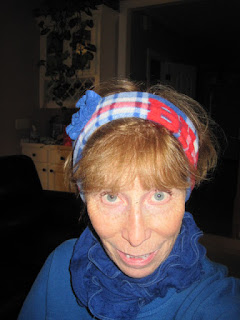 That is WAY cuter than the one I aborted.  Except it was missing something. 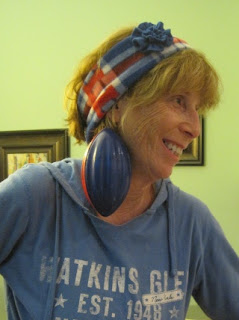 Because you really can't go to a football game without the proper jewelry.
Posted by Lou Clyde at 9:06 PM No comments:

That Donald Trump man bun literally drove me to drink.  I took one look at it and ran to the fridge, frantically opening a bottle box of wine.  I mean... look at it!  Eeeeuuuu. 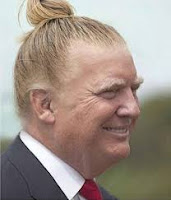 I find it hard to believe that there exists a hairstyle less becoming than his classic look.

As unsettling as it was, the photo was an epiphany for me.  Donald needs my help.

And although I hesitate to provide Donald Trump with ideas that may garner him additional votes, it's the humane thing to do.

A few years ago,  I test drove  some new styles and was able to evaluate, and eliminate, a number of celebrity looks ranging from Rihianna to Taylor Swift. 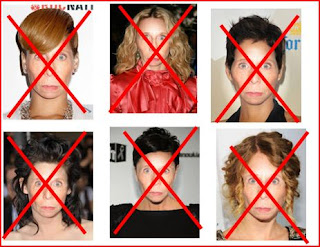 This virtual hair style tool allowed me to select the perfect hair style for my face.  And if worked for me, it would cetainly work for Donald.

I gave it a shot.  Donald clearly likes longer locks, so I thought he might consider the Justin Bieber look. 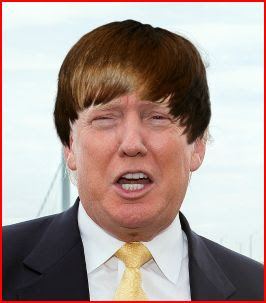 I think I met that guy at a hotel bar in Georgia back in the '80s.

I went back to the drawing board.

Since Donald Trump has the confidence of Don Draper, I thought I would try his look, that of a 1960's advertising magnate. 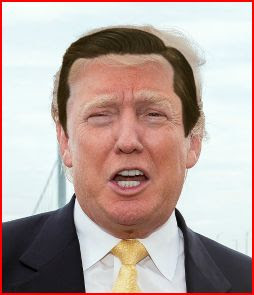 I don't know about you, I think that hairstyle looks way better on Jon Hamm.

I decided to try another Mad Men look: Roger Sterling. 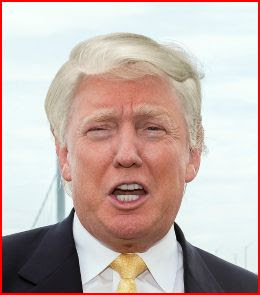 OMG.  How come I never noticed that Donald Trump has a Roger Sterling haircut???

Perhaps he should try the look of another politician. Mitt Romney has a nice head of hair: 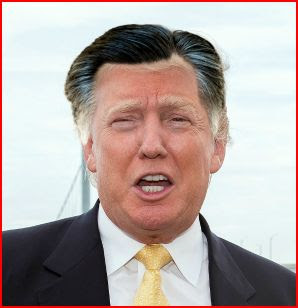 I like it!  But that hair didn't exactly catapult Mitt to presidency, did it?

If Trump really wants to be taken seriously, perhaps he should emulate his adversary... 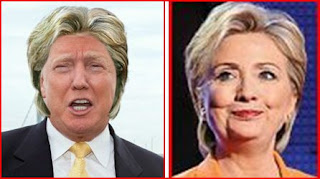 And you know what?  If Donald adopts Hillary's hairstyle, it will level the playing field.

No more distracting man buns.  Or comb-overs.  We can decide to vote - or not vote- for someone based simply on his or her platform. 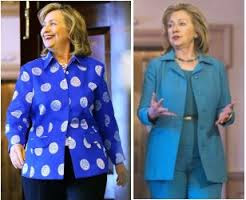