As I prepared to take my dog Kevin for a walk this morning in the sweltering heat it occurred to me that my recent "Wine Rack" purchase might make the walk more enjoyable. For those of you not familiar with this item, the Wine Rack is a drink dispensing sports bra that is advertised to increase your bust line by 2 cup sizes. 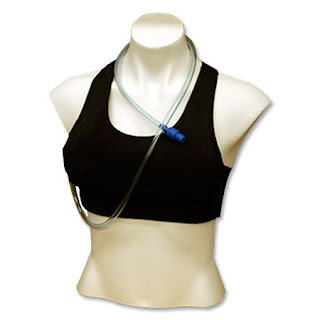 My Wine Rack arrived in the mail earlier this week in an innocuous brown envelope containing a sports bra and a plastic canteen with a long tube (straw) attached. At the end of the tube is a twist-top to be used to open and close the straw. It came with no directions (or warning labels).

I had been waiting for just the right time to test drive it. Since it was 10:00 in the morning, I decided to pilot my Wine Rack using Diet Coke, rather than wine. 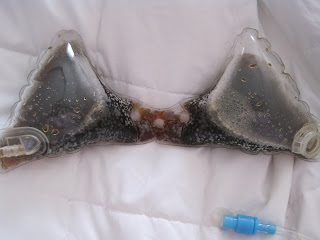 So, I filled the plastic boob shaped canteen with Diet Coke. "This is fabulous!", I thought. "How easy can you get?"

Next I put the sports bra on and attempted to situate the Diet Coke-filled falsies in place.

Then came my first ah-ha. It would probably be more natural looking (and feeling), if I hadn't filled them to the tip-top. 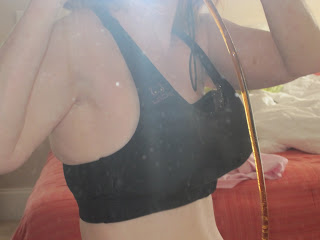 I looked a little unnatural, but I wasn't planning to leave the house in just my Wine Rack. I pulled a t-shirt over my head and strung the drinking tube through my sleeve. I looked in the mirror and nodded my approval. I was definitely looking hot.

Then I untwisted the twist-top to take a sip of my Diet Coke.

It was like a fire hydrant going off in my mouth. I raced to the bathroom sink as fast as I could, further shaking up the bottles, as Diet Coke squirted out of my nose, my ears and my eyeballs. It was like taking a shower in Diet Coke.

Third ah-ha: the Wine Rack is not appropriate for drinking carbonated beverages. Especially when filled to the tip-top and shaken up. (I can only imagine what would have happened if I had been practicing my pogo-stick/jump rope trick at the time).

In the end, I was completely covered in Diet Coke. Apparently Kevin was embarrassed by the scene I caused and refused to go on a walk with me. 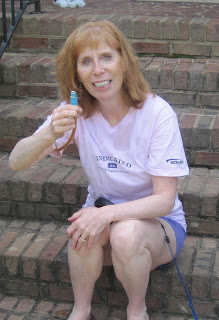 To hell with him.  I sat on the porch and finished my drink.  It was too hot to walk the dog anyhow.
Posted by Lou Clyde at 9:29 AM 3 comments:

Do I really look that bad?

My vanity has been exposed. Let me explain.
I recently started filming for a movie that is being shot in the Columbia area. The film is about a priest getting married in a future where Catholic priests are allowed to wed. I play the role of Imogene, an uptight, staunch, conservative Catholic who is opposed to this new liberty and basically makes life miserable for a priest and his new wife. I am in about 8 scenes that are spread throughout the script.
I read my scenes, but never actually read the whole script...until yesterday.
I was a initially a little concerned about my costuming. Black is not a good color for me and I wear the same ugly black dress in every single scene. My hair is always pulled into a tight bun. When not in an animated rage, I have a permanent scowl on my face. And, of course, Imogene would never wear makeup.
Yesterday I got to set a bit early (wearing my ugly black dress and my scowl.) I saw a script laying around and decided to read it from start to finish.
And the story and scenes all started coming together:
I kept reading. What's this? The next scene had two drunks in a bar looking up at the TV news.
Drunk # 1 says, "That woman's uglier than a kick in the prunes" 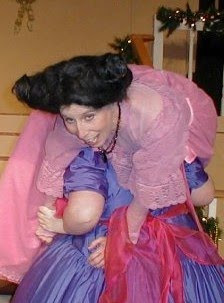 My ego survived that show in tact. I guess I'll survive this as well.
Posted by Lou Clyde at 11:23 AM No comments:

I wish I had a dollar for every time I've told Kevin to drop it. "It" can be anything from a piece of dental floss to a bathing suit. In fact, in the past hour I've told him to drop a baby doll coat, a used Kleenex, a pencil, a price tag, 3 socks, a wash cloth, a worm (from outside), a pack of post-it-notes, a pencil and a wii-charger. 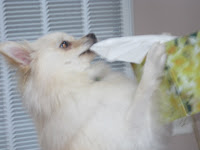 And the only thing he dropped during that hour was the worm. Why'd he drop the worm? Was it because it tasted bad? Because it fought back? Slipped out of his mouth?
Nah. It's because he was on a leash and couldn't run from me.
Kevin will NEVER drop on command if he's in the house. He'll look you in the eye, give you his best Hannibal Lecter look, and run under a bed snickering. Since I haven't been able to fit under a bed in years, he has found this to be a particularly effective (and entertaining) game.

In all honesty, if what's in his mouth is not likely to harm him (e.g. Kleenex, washcloth, sock) I do not engage in the hunt. I used to be able to apply the 'strike from above' maneuver, which involved telling him to drop it on one side of the bed and stealthily crawling over the bed and catching him, unsuspecting, from behind.
Kevin's gotten wise to that.
If Kevin's got something like a razor or a can of lighting fluid in his mouth I have to bring out the big guns: a broom, tear gas and several assistants to capture him on the other side of the bed. (This is not a one-person job.)
You may be wondering how a 9-pound puppy is able to get at all these things. Well, Kevin not your ordinary puppy. He's crafty, cunning and duplicitous.
And he's fast. Imagine the Road Runner employed as a ball boy in a tennis match.
For example: Kevin stands guard from his lair beneath the bed. He observes a pair of bare feet walking into the room and hears the sock drawer opening. He stays frozen and watches as the victim sits on the floor to put her socks on. She places one sock on the floor while she begins to puts the other sock on. He knows the exact point at which the victim's hands are pulling sock #1 over her heal. CHARGE!
Success. Sock under bed (with the rest of his bootie).
I was thinking that we should send Kevin back to PetSmart for grad school. Or perhaps he would be better suited for the military or the CIA - or politics. Anything to keep him from what appears to be his destiny: a life of crime.
Posted by Lou Clyde at 11:00 AM No comments: