I'm a dentaphobiac. And who can blame me? My dentophobia has deep roots (sorry... couldn't resist). 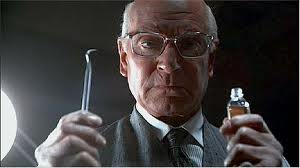 It started with my childhood dentist, Dr. Pozener, a masochist posing as a dentist. "Oh, little Mary Lou doesn't need Novocain today," he'd tell my Mom. "The cavity is just below the surface." Then he'd get out his 6 mm hammer drill and go to work. "Ah, quit you're sniveling," he'd say. "Is it safe?"

Fast forward to my Woody Allen dentist in Milwaukee. He was referred to me by my friend Tom (well, at least I thought he was a friend). Woody's office was in a sketchy part of town and his office was always empty. I may not have been his only patient, but I suspect I was his only patient with dental insurance.
Now I have nothing against the real Woody Allen. He is an excellent comedian and director, but would you want Woody Allen as a dentist?
"Oops...wrong tooth"
"Sorry about that... it's not bleeding much"
"Do you have any other friends with dental insurance you can refer to me?"
And Woody was crown happy. He replaced much of Dr. Pozener's old artwork with crowns.
I parted ways with Woody when he wanted to put a gold crown on my front tooth.
My next dentist, Dr. Tusk had to replace the crowns Woody put on. "Did he even measure those crowns before putting them on?  Hand me the jack-hammer, Wilma" Dr. Tusk ordered. "That quack must have used Krazy glue on this thing."
Dentists have come a long way. In fact spa dentistry has become a growing trend. Dentists offer amenities like aromatherapy, heated pillows and facials. You can even have a hand massage while having a root canal.
My current dentist has taken one step in that direction. Before the hygienist sand-blasted my teeth last week she spread Vaseline on my lips with a q-tip. But something was not right with that Vaseline. It was flavored, but not the normal fruity lip gloss flavor you would expect. I couldn't immediately ask the hygienist about the flavor, being as my mouth was otherwise occupied. Then it occurred to me. My lips smelled like baby powder.
At spitting time I asked her if it was my imagination or did my lips smell like baby powder. "Oh, yes. We're using Vaseline Baby for our patients' lips now."
Involuntary gag.
Baby powdered flavored Vaseline is intended to prevent diaper rash. My lips are not at risk for diaper rash. And I don't want Baby Powdered flavored Vaseline anywhere near my mouth.
Thy hygienist made a note in my chart.
I've requested Margarita flavored Vaseline for my next visit.
Posted by Lou Clyde at 10:23 AM No comments:

Dancing with the Stars

In retrospect, it may not have been the best idea to sign up for the Adult Jazz class with Tiffany. After all, I am a middle-aged white woman who does her best dancing after a margarita or two. But I couldn't resist....
The class began at 8:30 and I arrived exactly on time, brimming with enthusiasm. I got a few curious glances as I entered the studio wearing my “dance your ass off” t-shirt, dance pants, and snazzy Jazz shoes, but I figured they were just admiring my shirt. 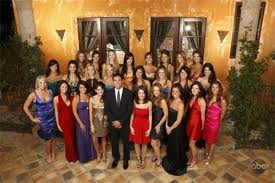 I soon noticed that, not counting Tiffany, I was older than all the other students...by several decades. In fact, they looked like they were contestants on The Bachelor (the first indication that I was out of my league). One thing was for sure: I was not going home with a rose.
The class began with some warm up exercises led by Brittany, the instructor. We started with a dozen or so laps around the room. Then she had us jump to a squat with our hands placed on the floor, kick our feet straight back, return them under our butts and stand (repeating about 25 times). “Hey! Stop the bus!” I said. “I think we’re doing squat thrusts!”
I hadn't done a squat thrust since 5th grade and they were just as painful as I remembered.  And the bachelorettes seemed to enjoy them.
The red flags were as subtle as a sledge hammer.
As we transitioned from one torturous exercise to another I grunted to Tiffany..."Are we ever going to dance?"
Brittany moved on to the push-ups. I looked around to see if we'd taken a wrong turn and had accidentally ended up at Fort Jackson. “If they make us scale the walls I’m outta here,” I threatened.
Finally, we got to the dancing. It started out easy enough: 8-counts of choreography. We ran through it twice and I was feeling pretty darn good about my dancing. That is, until Brittany said "Let's speed it up.” We did it double time. "Now to the music", Brittany chirped. The music was twice as fast as the double-time (e.g. quadruple time).
"Let's move on", sang Brittany. "You'll remember this next segment from last year". Last year??  But we weren't in the class last year!
Now if this wasn't a red flag, call me colorblind.
The "segment from last year" included a pirouette. Brittany informed us that we could choose to make it a double pirouette if we preferred. Right. 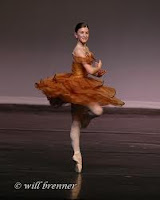 My pirouette resembled a "ring around the rosie".
The pirouette was followed by a high kick...well, at least for the rest of the class. I followed up my ring around the rosie with a stubbed toe.
For the next 20 minutes it was more of:
"Let's speed it up!"
"Adding on..."
"Double time."
"Adding on..."
By 9:15 I was begging for squat thrusts.
Mercifully, the class came to an end, but not before we had to break into 2 groups and perform for each other. I was wishing my water bottle contained a margarita. On the way out Tiffany and I stopped to talk to Brittany. Tiffany jokingly asked if there was a Senior Adult Jazz class we could switch to and Brittany let her know that she could attend the Monday night Beginner Adult Jazz class.
Then she looked at me, and said (very slowly), “I’m sorry, honey, but you're out of luck. The Special Ed Jazz class is full”.

Okay, so I made that part up.  But I could tell she was thinking it!
Posted by Lou Clyde at 6:44 PM 1 comment:

Email ThisBlogThis!Share to TwitterShare to FacebookShare to Pinterest
Labels: Bachelorette, Dancing with the Stars, squat thrusts

Going for the Spray Tan

I decided to go for it. I called Sun Your Buns to set up an appointment.

" I'm a spray tan virgin. Is there anything I need to do to prepare?"
"Take a shower before coming and exfoliate your skin."

I start every morning with an SAT question of the day e-mailed to me. I thought my vocabulary was pretty darn good. But exfoliate? What the heck does that mean? I didn't want to sound stupid, and thought I might be able to figure it out if she used it in a sentence. 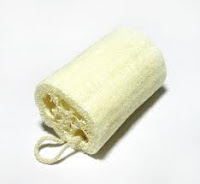 "So, you say I have to exfoliate my skin, right?"
"Right. Any other questions?"

That didn't help. Better be direct.
"Exactly how do you exfoliate your skin?"

For those of you who didn't know, exfoliating is basically scrubbing dead cells off your skin. So I exfoliated my skin.

It made me look even whiter. Not off to a good start.

I talked my co-stripper Tiffany into going with me to the tanning place for moral support. We walked in and I told the girl at the counter (let's call her "Suzie") that I wanted to look like Tiffany. She informed me that they do spray tans, not plastic surgery. 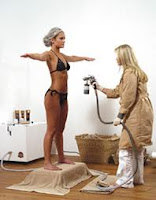 When I explained to her that we were playing strippers in Gypsy and I wanted shed my Boo Radley look, Suzie was so excited that she upgraded me from a Mystic Tan to a spray tan. To use a car wash metaphor, instead of driving though the tanning spray, I would have my body detailed.

There have been times in my life when I felt I'd lost my dignity, most of which involved various medical procedures (e.g. giving birth, having a mammogram, etc.) Well, when I left the dressing room in my paper bra and Tarzan-like thong on my lily white skin, wearing a plastic shower cap on my head I caught a glimpse of myself in the mirror. And my dignity sunk to an all-time low. 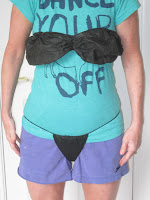 Tiffany tried to talk me into taking a picture for the blog, but I decided to protect my readers. Here's the g-rated version:

And then Suzie turned on the fire hose of tanning fluid and I turned in a slow circle, not unlike a rotisserie chicken at Food Lion. After several minutes of spray I was ready for the dry cycle. She handed me a leaf blower and before you know it my spray tan extravaganza was over.

When I walked out of the spray tan booth I looked exactly like Tiffany. Well, not really. But my skin was the same color.

And when I walked on stage last night I thought I heard a comment from the orchestra pit:

"So where'd they get that hot under-study for the albino stripper?"
Posted by Lou Clyde at 9:08 PM 1 comment:

Do I really need a tan? Admittedly I look like Boo Radley standing next to the other strippers on stage. It's the story of my life.
The following is a comprehensive list of the colors my skin has ever been: 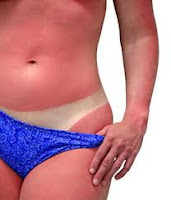 Wait.... I forgot bright red. Wait again. Add green to the list (that Halloween I dressed as a green been.) And we can add pale green to the list too, since the tempera paint took a week or so to fade away.
So here's the comprehensive list:
Notice that tan is not on the list.
My stripper sisters suggested that I get a spray tan. I decided to do some research on this new approach to becoming bronze. I understand that it's kind like driving through a car wash naked, only your body is the car and tanning spray is the soapy water. 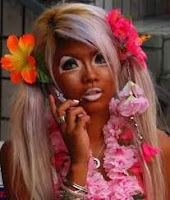 There are definite advantages to spray tans. You get tan quickly without the skin cancer and wrinkles. But my research uncovered some inherent risks: orange hands, blotchy face, stained finger nails, and rings around the armpits.

Let's stop there.  I have to stop center stage, raise my hands and shimmy.  Rings around the armpits will not do.


I can hear it now:
"Did you see that stripper in the middle? Was that deodorant in her armpits?"
"No, I think it was that disease that Michael Jackson had - vertigo or something?"
"I heard it was scarring from her breast implants"
I may change my mind before opening night, but as of right now I'm thinking I would prefer hearing:
"Wow! I never knew Albino strippers could move like that!"
Posted by Lou Clyde at 12:12 PM 1 comment: