We heard the din from blocks away.  Cheering.  Hooting.  Screaming.  Singing "Shout".  And "Lets Go Buff-A-Lo".

As my friend Mike and I rounded the corner, we encountered the sea of red and blue.  Lot X was packed with thousands of crazy-ass Buffalo Bills fans who had waited a long time for the privilege of attending a playoff game.

The 17-year playoff drought was over.

And these fans were celebrating.  Lot X had been transformed to Orchard Park South.

The excitement was contagious.

These die-hard fans were proud.  And emotional.  And they travelled a long way to attend this Buffalo Bill's playoff game in Jacksonville, Florida. 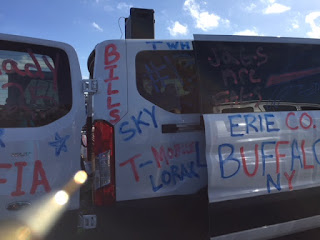 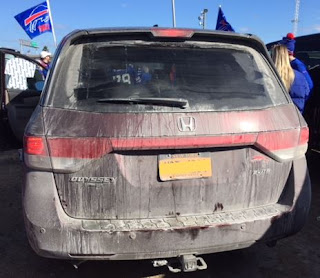 They had to come.  No choice.  This was the Bills' first playoff game of the century.

The playoffs became a reality on New Year's Eve.  The stars aligned at about 7:45 PM EST.  Buffalo had just beaten Miami and Cincinnati pulled off a dramatic upset of Baltimore, awarding Buffalo the last wild card spot.

Shouts could be heard around the world.

I'm not exaggerating.  There are Bills fans everywhere.

JP, a Buffalo transplant now living in DC, packed his Buffalo Bills PJs and drove 800 miles to Jax.  He was not going to miss that game. 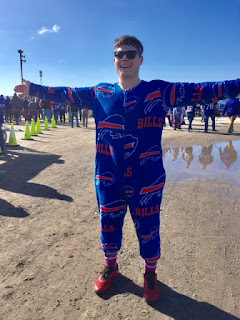 Jack, who chose more formal attire for the game, had a less convenient itinerary.  He flew from NYC to Tampa and drove the 200 miles to Jacksonville in a rental car. 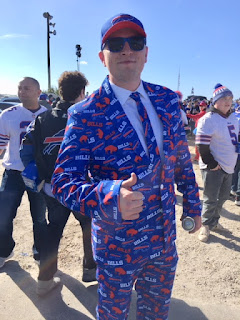 Jack was 6 years old the last time the Bills had a playoff berth.

Then there was Stephen from Rochester, who took a train to Philly to catch his flight to Jacksonville.  He had not been expecting the team to make the playoffs.  He was happy enough when they beat Miami, but when Cincinnati scored that touchdown on a 4th and 12 play? 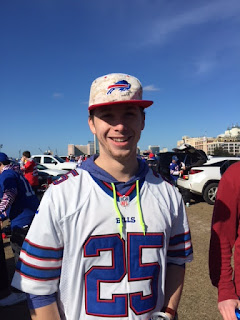 Josh, Bailey, and Erik had their airline tickets and hotel rooms booked within two hours of that game's finish. 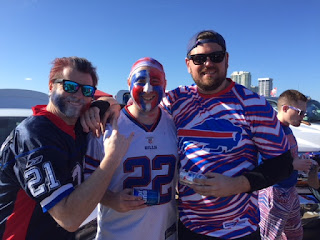 There was no way they were going to miss the first playoff game since 1999.

Michelle and Jenna were watching last week's game in a house with 28 of their best friends.  "Everyone was screaming. And there were plenty of tears." 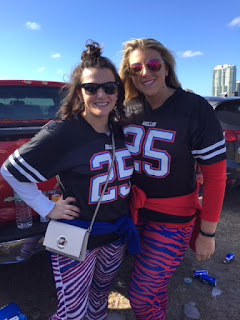 They booked their flights immediately.

Jenna #2 was lucky to make it to the game after her flight was nearly cancelled. 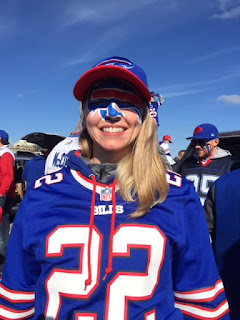 She flew from Rochester to Tampa and drove to a hotel in Daytona Beach, arriving at 3 am Sunday morning.

Tyler, originally from Attica, had a short commute from Ft. Meyers.  He brought along his deep fryer and boxcars of chicken wings to share with scores of new friends in Lot X. 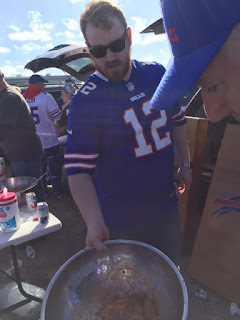 Tyler, who was 6 years old the last time the Bills had post-season play, watched the Miami game at his parents' house.  He commented that the second half of the game was "normal Bills' shit" (aka Dolphins coming from behind).  When Cincinnati won, his family "went insane".

Champagne and palm trees were involved.

In the center of the pandemonium stood Jamile, a confused Jaguars fan who somehow parked his car in Lot X. 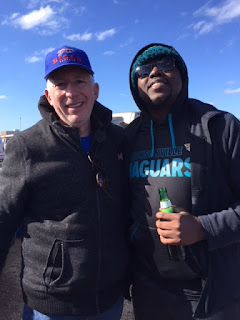 He had to admit, "You guys know how to travel."

Marshall and Jackie from North Tonawanda took the scenic route to Jacksonville, driving to Cleveland, flying to Orlando and taking a rental car 145 miles to the game. 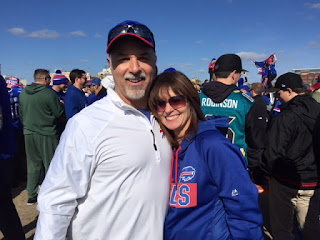 He's been going to Bills games for 42 years.

Karen and Vinnie are best friends who met in Lot X on playoff day. 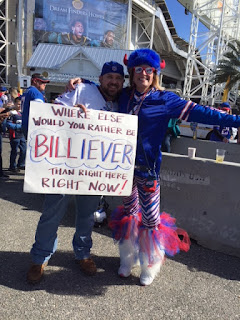 Karen apparently booked her non-refundable flight to Jacksonville BEFORE THE MIAMI GAME WAS OVER.

Every Bills fan knows that no game is over UNTIL IT IS OVER.

I asked her, "Have you not heard about the Music City Miracle?"

"She was drunk," said Vinnie.

Mike and I left Lot X after meeting a myriad of amazing fans.  Celebrating as if they had won the Power Ball lottery.

As we headed into the stadium we noticed Jaguars fans tailgating. 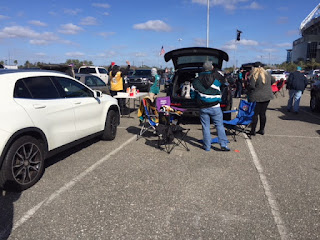 The day would have been perfect had the Bills upset the Jaguars. Unfortunately, the Bills' offense did not show up on the field.

Sill, I suspect that nobody I met in Lot X that day regrets making the trip to Jacksonville for one of the most boring playoff games in the history of the NFL.

Lot X was as far from boring as you can get and I will never forget my time there.

With my Bills Mafia peeps.

After the game Mike and I ran into Raul and Celina, Bills fans living in Kissimmee, Florida.  They were married in 1999, the last time the Bills made it to the playoffs.  In fact, Raul affectionately calls Celine, "the curse."  They were at the Miami game last week and stayed in the stadium, in enemy territory, with other Bills fans to watch the infamous 4th and 12 touchdown.  Raul described the scene: people openly crying. 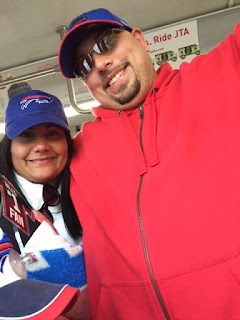 "It was the best day of my life," he said.  Then he snuck a look at Celine (the curse), and added, "not counting when my kids were born."
Posted by Lou Clyde at 2:03 PM