To Braid or Not to Braid- That is the Question

When people ask me how I ended up living in Columbia, South Carolina, I tell them I moved here for a great job opportunity, which is only part of the story.

The truth is, I’m here because of a French Braid.

In fact, the entire course of my life was altered because of that damn braid.

Flash back to June, 1982.  Bowling Green, Ohio.  I was fresh out of grad school, eager to land a job in the real world.  I had an interview with the Leo Burnett Advertising Agency at 10:00 the next morning.

It was my dream job.  Leo Burnett was one of the top advertising agencies in the country, and they were looking for a statistical research analyst. That job had my name written all over it.


And it was at Leo Burnett!

The creative geniuses behind the Pillsbury Dough Boy and the Keebler Elves!   They were the stinkin’ Super Bowl winners in the Advertising space.  And I was going to work for them!


My new navy blue interview suit hung over my closet door.  My red silk blouse was ironed.  I’d even invested in a new pair of panty hose.

OMG.  I was so excited.  All I had to do was go to bed, wake up, drive ½ hour to Toledo, hop on a plane, take a cab to Leo Burnett’s downtown office, and impress the interview team with my brilliance.  Simple.

The French Braid was my idea.  I thought I would look more professional if my hair was braided.  My friend Janet O. came over that night to braid it, tucking ever loose hair in place, generously applying hair spray to maximize the hold.


I’m a side sleeper, but I quickly discovered that sleeping on one’s side is not conducive to keeping a French Braid intact.   I could feel the braid begin to loosen.


So I rolled to my back, carefully placing the braid flat on the pillow before joining it.


It felt like I was laying atop a beer bottle.   Made of rock.


I attempted some creative pillow origami, placing one pillow on either side of my head, with the beer bottle braid wedged between them.  If I could remain perfectly still, the rockin’ stinkin’ French Braid would survive the night. 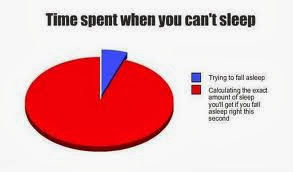 As you might imagine, it was a wee bit difficult to fall asleep in this position, and with every tick of the clock I became more and more anxious.  At about midnight I drove to an all night pharmacy to buy Sominex (AKA Tylenol PM of the olden days).


The clerk complimented me on my hair.


Sadly, the Sominex did not work. In fact, I never slept a wink until the plane took off for Chicago.  I slept for 43 minutes, the length of the flight.  And in the cab on the way to my interview.

I somehow pulled it together and kicked some ass in the morning interviews, running on pure adrenalin.   It was at lunch when things started going downhill, or more accurately, where the fatal crash and burn occurred.

The manager of the analytics team asked me a series of technical questions.  I became less and less coherent with each question.

“Could you please repeat the question?”


“Um, yes I learned that in my Applied Statistics program.  I love that kind of problem.  It has something to do with the normal distribution.  Or a table of random numbers.  Or maybe a French Braid?”


Then I started performing my Multicollinearity Rap.


OK, I didn’t really sing my Multicollineariy Rap, but I probably would have if I had written it by then.


It was the worst interview in the history of interviews.  I suppose it could have been worse.  I never threw up.


But my French Braid was lovely.  Not a hair out of place.

About a month later I interviewed at Miller Brewing Company for another amazing job.  I did not braid my hair and, although I didn't look as "professional", I landed the position.

And, at the risk of sounding hokey, I'm glad I wore my hair in a French Braid for that interview.

The more I think about it, those Keebler Elves are kind of creepy.

Nail on the Head

Who said you can’t teach an old dog new tricks.

Sure.  I’ve never been able to successfully pull off a practical joke in my entire life.

But I’ve never had a Fake Nail Through the Finger before!

Just looking at it makes me giggle!!

But I can’t giggle.  That’s always been my downfall.   Whenever I attempt to pull off a prank, the snorting begins.  All I have to do is look at the person I’m trying to prank and I start sniggering. 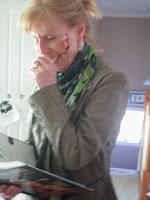 (Like the day I wore my bacon bandage to a meeting.)

But I was prepared this time.  I developed a plan.

He’d never buy it.  He’s way too smart for that.  He’d wonder why he hadn’t heard any hammering before my accident.

So I got a hammer and real nail and announced loudly that I was going to be hammering a nail into the wall.  In fact, I showed him the new key holder that I purchased.  “See this new key holder?” I said, holding it up proudly, not unlike Vanna White in Wheel of Fortune.  “I’m going to hammer this into the wall next to the back door.”

Just for effects I said, “I better be careful not to hurt my finger, or anything.”

“I mean, a hammer is a dangerous tool.  Who knows what could happen if I miss the nail.”

I left the room and implemented my plan.  I hammered several times and screamed. 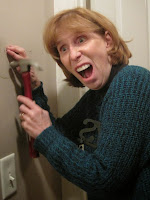 I put my fake nail and the bloody bandage around my finger, running dramatically into the family room, sounding remarkably like Meryl Steep and whimpered, “Dave!  Look what I’ve done!”

He glanced at my finger and said, “I hope you didn’t spend more than a dime on that stupid thing.”

I must admit that I fell short of my goal.  Although I did manage to pull off the stunt without one giggle, it was not convincing.

But I know where I went wrong.

I put it on the wrong appendage. 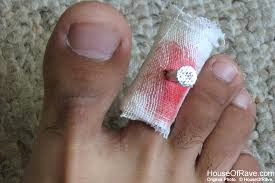 Dave would have completely fallen for the Fake Nail Through the Toe trick.  Hook line and sinker.
Posted by Lou Clyde at 7:09 PM No comments:

I’ve always got my eyes open for exciting new products to showcase in my mall kiosk.  And I hit pay dirt when I discovered F-Cup cookies on the Japan Trend Shop website.

Clearly, F-Cup cookies would make a fine addition to my product mix.

I was certain that, with proper marketing, F-Cup cookies could be more popular than even the 2014 Furby.  In fact, they could potentially outsell the next generation I-Phone.

After all, who doesn’t want an F-cup?

I developed my pricing strategy.  I believe consumers would spend up to $29.99 for a box of cookies that will expand one’s bust to an F-Cup.

Unfortunately,  the cost of the cookies ($22 plus $12 shipping and handling) was excessive.  I would have to find a cheaper product source.

I looked closely at the F-Cup advertising copy.  F-Cup cookies include a 50 mg dose of the Pueraria Mirifica plant, which is, apparently, the special ingredient which “boost your assets” (their words, not mine).

So, all I would have to do is get my hands on some Pueraria Mirifica plants and bake them into cookies.

But I quickly discovered that neither Lowes nor Home Depot sells Pueraria Mirifica plants.

So I did some more research.  OMG.  This is one potent plant.  According to Wikpedia,

“The benefits of this this medicine is to support memory, talk big, and be able to remember three books of the astrology, make the skin smooth like six year old kid, live more than 1,000 years and parasite diseases are not able to be of trouble.” 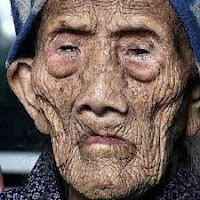 So my Nerdling F-Cup cookies would not only boost a woman’s assets to an F-cup, but would increase her memory so she could remember not 1, not 2, but 3 books of astrology, make her skin smooth like a 6-year old kid, and live more than 1,000 years with no parasites?

I was completely on board until I read that a 1,000 year old would have skin as smooth as a 6-year old.  Come on!  My mama didn’t raise no fool.

There is no way in the world any one over the age of, say, 980 years of age would have skin as smooth as a 6-year old.

Not to mention that parasite thing.

I mean, I would think women with F-cups be parasite magnets.

That brand promise is way too lofty for my Nerdling F-Cup cookies.  I have a reputation to protect.  I’ll just stick with the basics.

Nerdling F-Cup Cookies will increase your bust size to an F-cup.  And increase your memory so that you can remember not 1, not 2, but 3 books of astrology telephone numbers.
Posted by Lou Clyde at 8:50 PM No comments:

When my friend Chris told me about the Electro Smile, I was shocked.

What’s not to love about this amazing Japanese invention?  A contraption that sends electric shocks to a child’s cheeks triggering the muscles in their face to force a smile?   And such a sincere smile!

The advertising copy is powerful:  “Pout no more.  Granny’s coming.  Your kids will look happy with the push of a button!”

It gets better.  Apparently you can adjust the settings for fast action: “30 Amp Super Shock to slap a smile and grin FAST”.  And the smile last for days! 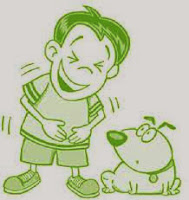 Talk about marketing genius.  Once again, the Japanese identified an unmet need in the market place and developed a product to meet that need.

It goes without saying that this product would have been a flop when I was a kid.

Our parents had the opposite problem.  If I had a dollar for every time I was told to “Wipe that smile off your face,” well, I’d be able to afford a house full of Electro Smiles today.

I decided to order myself an Electro Smile, thinking that it would be fun to have around the house.

However, when I attempted to purchase my new Electro Smile, I could not find the device for sale anywhere.  I dug deeper and discovered the Electro Smile to be a big stinkin’ HOAX. 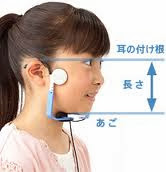 The Kami Kami Sensor counts how many bites a child makes and beeps to notify parents of every 30 bites their child takes.  Plus it plays a melody after every 1,000 bites.  All to encourage kids to chew their food thoroughly.

I don’t know about you, but the Kami Kami Sensor sounds like torture to me.   Can you just imagine being forced to listen to beeps and melodies during a meal?   And what if you had more than 1 kid?

Still, nobody is addressing the elephant in the room: the need that remains unmet.  Without an Electro Smile to force our children to smile, what options remain?

Or the fail safe, tried but true method. 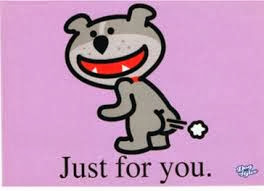 Fart jokes.
Posted by Lou Clyde at 8:56 AM No comments: