It wasn’t the Barbie doll itself that was unusual. It was what she was wearing on her feet. Rollerblade Barbie was wearing rollerblades that shot out sparks when she skated.
In fact they had a flint on the bottom that looked remarkably like a cigarette lighter. That’s what prompted me to call Mattel’s 1-800 number in the summer of 1991.
“I'm calling about the Rollerblade Barbie my 3-year old daughter got for her birthday.”

“Yes, is there a problem with her Rollerblade Barbie?”
“Barbie’s rollerblades shoot sparks when she skates.”
“They’re supposed to shoot sparks. She's Rollerblade Barbie.”
“And the rollerblades look like a cigarette lighter.”
“That’s because they have a flint. That's what makes Barbie's rollerblades shoot sparks!”
“Isn't Mattel concerned that Barbie's rollerblades might teach kids how to use lighters?"
“If you would like, I can send you a pair of rollerblades that don’t make sparks.”
Blah-blah-blah.
I decided to take the Barbie rollerblades to work, where over the years they have made an outstanding conversation piece.  Whenever I needed an example of a bad marketing idea, I'd pull out my Barbie rollerblades and get on my nerdling soapbox. “Can you believe they actually SOLD these to children? They look like a damn cigarette lighter!”
Come to turn out, they were also a fire hazard.  About 15 years ago, Dave Barry discovered that if you sprayed men’s underwear with hairspray and rolled Rollerblade Barbie across it, the underwear will ignite. (In fact, he successfully demonstrated this trick on David Letterman.)
I often wondered if my Barbie rollerblades could start a fire.  So I decided to replicate the experiment.

First I had to find a Barbie.
At one time we had dozens of Barbie’s in my house. Where had they gone? Had they gotten wind of my experiment and made a stealthy escape? I finally found one hidden under about 39 Beanie Babies in the attic. 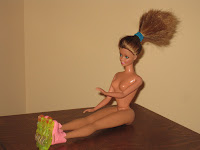 “Gotcha!”  The rollerblades fit perfectly.
Now all I needed was some underwear.
Dave refused to donate a pair of underwear to the cause. Linda wouldn't cough up any and I'm way to shy to use mine.  So I decided to use an old training bra.

Linda and I set up our experiment in the driveway.  We sprayed the bra with hairspray and raced Barbie over it, again and again.  Sparks, but no flames.

We tried all kinds of angles and impressive Barbie gymnastic moves.

We decided to pull out all the stops and add our secret ingredient: dryer lint.

I was beginning to feel like Tom Hanks in Cast Away.
Then we completely abandoned Barbie and raced the skates directly on the bra (sans high heeled feet).

Hey! Somebody give me back my skates!", Barbie pouted pathetically.

"Shut up or you're going to be my next toothpick holder", I threatened.
Gradually the skates lost their spark.  I suspect all those years of my office demonstrations contributed to their demise.
But wait a minute.  I had an epiphany.  Barbie is the antithesis of women's lib.  She would never burn a bra.
Bitch. 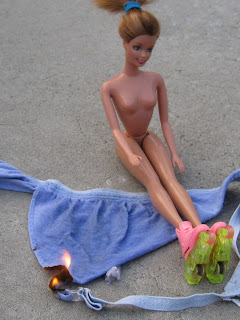