I just wish I was a fly on the wall in the Japan Trend Shop brainstorming session on umbrellas.

They clearly followed the cardinal rule of brainstorming:  no idea is a bad one.

Haruto says, “We could sell an umbrella shaped like an apple.   No!   That’s too ordinary.  How about the head of lettuce!”

Nobody says, “Who wants to carry an umbrella that looks like their lunch?” 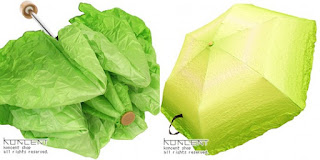 Then comes Kaito’s suggestion, “When it stops raining and you close your umbrella, it gets your clothes wet.  How about an umbrella that can be dragged on the ground so you stay dry?”

And Tatsuki says, “Let’s put wheels on it!"

Nobody says, "Why not just stick your wet umbrella in a plastic bag?"

Then Yomato says, “Why not put the wet umbrella to work??!!  Let’s make an umbrella stand with grass seed in the bottom?”

Nobody says, “Who wants to weed their umbrella stand?” 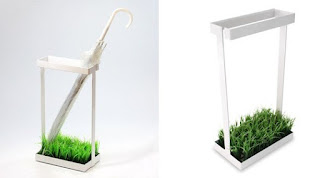 Then Ibuki says, “Speaking of bottom, why not make an umbrella that looks like you’re looking up a girls skirt from underneath it?”

Or the English translation,  “ARE YOU FREAKIN’ KIDDING ME WHAT KIND OF SKUM BAG DEVIANT ARE YOU?”

Instead we get this.

Don’t judge.  I have a reputation to protect.  I immediately ordered a 4-pack on Amazon.

Then I did some research about Pocket Protectors and learned that they were invented by an engineer from Buffalo.  My home town.

It brought tears to my eyes.

I was giddy with excitement when my Pocket Protectors arrived.  I tore into the box and examined them.   Quite impressive.  They hold up to 4 pens or pencils.  Leak proof.

No more ink stains on my shirts!

How had I gone through my whole life (39 years) without a Pocket Protector?

Of course, Kevin begged me give him one...since I had 4. 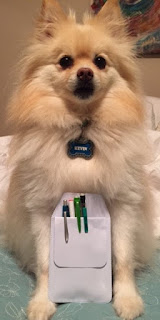 I couldn't wait to try mine on for size.  But then I realized that you have to have a pocket in order to use a Pocket Protector.

I went to my closet, searching for a blouse with a front pocket.

Nothing more pathetic than Pocket Protector with no pocket.

Surely I could find one stinkin’ shirt with a pocket SOMEWHERE IN THIS HOUSE!!!

I went up to Kimmy’s closet.  Nothing.  Are you kidding?

I was out of luck.  Now where was I going to put my pencils?

I forgot all about my scathingly brilliant invention from 2013.

(I think Einstein had a similar problem.  When you have so many great ideas, it's hard to keep track of them all.) 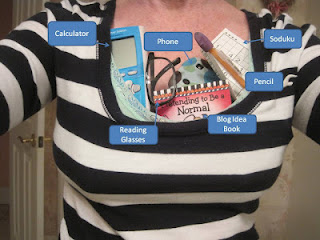 Who needs a stinkin’ Pocket Protector if you have a Boob Bin?
Posted by Lou Clyde at 6:18 PM No comments:

The email was certainly fortuitous.  It was from someone named Jess who said she loved my United Club blog post.  She asked if I would consider writing a post about optimizing your credit cards.

I basically responded HELL YEAH!  I was actually considering blogging about that anyhow. Because my husband Drives. Me. Crazy.

With his optimization of credit card rewards.

At LEAST once every few months he’ll text me with instructions. 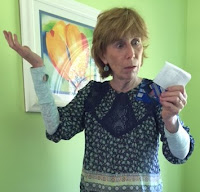 He says he texts me so I have it “in writing”.  But it’s actually because he doesn’t want to be exposed to my eye rolls.

Then about two weeks later I’ll get another text, “We reached the maximum points for restaurants with the Discover card.  Use the Blue Bank of America card until July 1.” 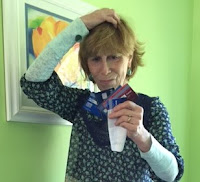 I think Jessica’s on to something!  What Dave puts me through is ridiculously funny, in a sick kind of way.

Except it turns out Jessica was on an entirely different wavelength.  She thinks Dave’s a genius and wants me to include his “tips” in a blog.

HIS tips!  I spend most of my life trying to avoid his tips.

What about MY tips?   I mean, what am I, chopped liver?

I use Ibotta.  Unless I’m with Dave because he points out that the Jiff Peanut Butter Bars with the 75 cent rebate actually cost $1.00 more than the generic brand.

And he absolutely NEVER appreciates what a good Belk shopper I am. I mean, I frequently save way more than I spend.

“Guess how much I saved at Belk on this dress!” I’ll say, wound up like an addict on crack.

“Dave!”  I’ll say, twirling in my dress, in front of the TV he's trying to watch. “Guess how much I saved!”

He’s focused on the baseball game again.  I dance again in front of the TV.

“Guess!” I say again as I twirl. “Guess how much money I saved us." 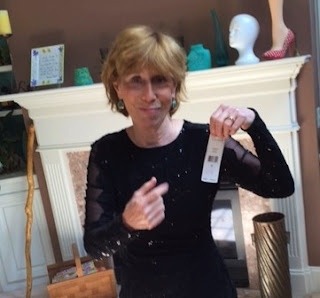 Then he says the six words I’ve come to hate.

“What credit card did you use?”

Dave is not available to give tips to your readers.

He’s way too busy giving them to me.

That was the end of blog.  That is, prior to departing on my guilt trip.

Okay, okay.  Here are his tips.  I hope you appreciate that I not only had to listen to him tell me, I had to take notes.

Both Bank of America cards have a specials with discounts off at specific retailers (PetSmart, Auto Zone) throughout the year.

Discover has a card with rotating categories with 5% rebates.   For example, this quarter you get a 5% rebate on money charged at restaurants.   All others categories get 1%.  The Chase Freedom card works the same.  (Note, this is the one that gets under my skin.  Just sayin’)

None of these cards have fees but all have huge interest rates.  Always pay your balances off in full.   You shouldn’t use any of these cards if you carry a balance.

Picking Up Rolls at Food Lion

I know I told Dave I’d pick up rolls for dinner on my way home from the theatre, but I couldn’t do it.  And he was being unreasonable.

He didn’t care.  “You’re driving right past it.”

I glanced at myself in the rear view mirror. “There’s no way!  I’ll scare away the customers.”

“Nobody will be in Food Lion this time of day."

Famous last words.  I cursed him as I turned into the Food Lion parking lot.  That was jammed with cars. Nobody will be in Food Lion.  Right.

I found a spot and raced into the store.

Where I ran head on into a Mom with a little boy.  The kid took one look at me and buried his head in his mother.  “No Caleb,” I heard her say, “Monsters aren’t real.  She’s just pretend.”

I put my head down, making a beeline for the bakery department, where I saw one of my neighbors.  Luckily, she didn’t see me.  Dodged that bullet.  I grabbed the rolls and ran toward the checkout lanes which were overflowing with people.

Crap!  There was that lady from church.  I did u-turn, took a detour through the cereal aisle and finally found my way back to the front of the store.

I stepped in line behind a woman with about 50 items in her cart.  “Oh my God!” she said when she looked at me.   “What happened to you?”

I placed my rolls on the conveyor belt and the teenage Food Lion worker, let’s call him “Denzel”, looked at me and said, “How are you?” as he proceeded to scan my rolls.

Not the reaction I was expecting.

“Well, to be honest, I’m not feeling very well,” I said, and giggled under my breath.

Damn Denzel!  I deserved a reaction and he was giving me nothing.

I slid my credit card into the reader and continued. “I mean, I’m really feeling sick.”

Denzel put my rolls into a bag, nonplussed.

Denzel handed me my bag.  "Have a good day."

But I wasn't done. “In fact I think I died last week.”

I was just about to ask him if he could give me a ride to my car in a grocery cart when I came to my senses.

I had to get home with my rolls.

I had a husband to scare.