There are some things in life that I'm better off not knowing about.

But in the interest of fostering the minds and raising the IQs of my readers, here goes:

Children in Japan keep insects as pets.  And they name them.  Names like Sumatra Hirata.

And they play with them.  And teach them tricks.  And how to wrestle.

Especially if their special insect pet is a stag beetle.

I know what you're thinking.  How the heck can you teach a bug how to wrestle?

Apparently the athlete's diet is important.  He needs supplemental feedings of energy-rich food such as sugar.

During practice, the trainer blows a small noisemaker that sounds like the female stag beetle's mating call.  Sumatra's hormones then take over; he wants a woman and will wrestle any stag beetle that gets in his way.

(Really, not much different from high school wrestling.)

Time for another deep breath.

In Japan, you can buy live insects in vending machines. I AM NOT KIDDING.

Which is ridiculous!  Think about how much wine you could buy with 10 million yen.

Many Japanese children lack the resources to buy insects, and opt to hunt for their bugs.  Which brings me to the newest product on the Japan Trend Shop web site: The Mikilocos Insect Getter Catcher.

(Is it just me, or is that name a wee bit redundant?) 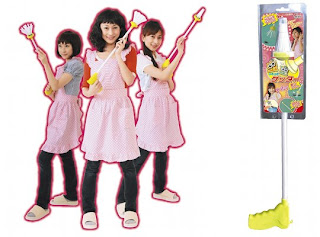 The Mikilocos Insect Getter Catcher appears to be pretty straight forward to operate.  Apparently, you first have to pose like Charlie's Angels.  Then pull the trigger.  The bug-catching arm will grab the bugs so you can deposit them into their new home.

And you can begin training them for their wrestling careers.

The  Mikilocos Insect Getter Catcher sells for $30 on the Japan Trend Shop web site, a bit outside of my blog budget.  As you know, I could most certainly reproduce this product with materials I purchase at the Dollar Store.

I have decided not to do that.

I'm afraid it might work.
Posted by Lou Clyde at 6:29 PM No comments:

The Drink's Under Me

I could not believe my eyes.

It was the coolest, most unique and entertaining children's toy I had ever seen.

It is a miniature toilet in which you can make and drink sweets.

But it gets better!

You can decorate the toilets with stickers, "turning them from lavatories to characters." 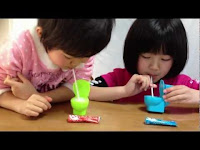 OMG.  Where were toys like this when I was a kid?   My dog was the only one allowed to drink out of a toilet in my house.

And I was certainly not allowed to decorate my toilet with stickers!  If I had, I would be cleaning said toilet with a toothbrush.

Readers, is this not the most astounding invention you have ever seen?  The Japan Trend Shop has simply outdone itself.

The Moko Moko Mokolet Candy Toilet costs $39 (plus shipping and handling), a bit out of my blog budget. 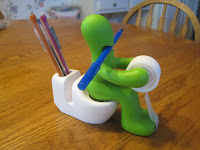 Of course Fred wasn't too happy about giving up his seat.   For months he's been doing an outstanding job serving as a conversation piece on my table at work.

Clients would come to my office for a meeting and Fred would be sitting in the middle of the table, right next to my Alien Abduction Lamp. 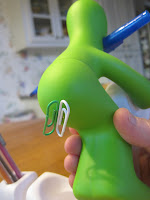 If they didn't notice Fred right away, I would nudge him closer to the client who would ultimately say, "Is that what I think it is?"  At which time I'd lift Fred off his throne and offer my client a paper clip.

That's just how gracious I am.

As you all know, I never simply replicate the products I find on the Japan Trend Shop web site.  I enhance them, elevating products to new levels of excellence.

I don't know about you,  but I think  that foamy stuff coming out of the Moko Moko Mokolet Candy Toilet looks fake.

My toilet at home never looks like that.  I certainly didn't want the Nerdo Nerdo Nerdolet Candy Toilet to look fake.

So I added a little Mt. Dew! 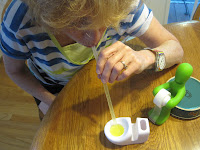 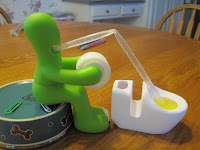 It took Dave a few minutes to put it all together.

He had stubbed his toe on the suitcase I'd left in the doorway to the bedroom, and hopped noisily to the bathroom on one foot, cursing all the way.  Kevin was barking in tandem.

"Come on!" I groaned.  "I've got an all day strategy session tomorrow."

Those two can be so insensitive.  And loud.

Apparently after Dave used the bathroom, he noticed the blood.

"There's blood all over the bathroom!" he observed astutely.  "Hey.  It's mine!"  he added.

Then, "My toe is gushing like a fire hydrant!"

I gave up on my pointless attempt at sleep and reluctantly entered the bathroom to see if Dave needed my help.

It was like a damn crime scene.  Blood was everywhere!   Puddles of bright red blood were all over the bathroom floor!

He said, "Would you mind getting me a sock?  I'll have to wear a sock to bed."

"Are you kidding?" I said.  "That thing needs a tourniquet!   It will laugh at a sock!"

It was like that famous Julia Child-Saturday Night Live episode.   Blood was erupting from his middle toe.

I managed to find some gauze pads left over from one of Linda's many accidents and helped Dave tape up his toe.  Then I got him his sock.

And I went back to bed (after I mopped up the blood).

Dave crawled into bed wearing the stupid sock.  I thought about my white blanket and said nicely,  "Please don't get any blood on my blanket."

My pulse was still racing as I thought of all that had happened.  It was clear that sleep would not come easily for me.

In contrast, Dave was already beginning his pre-snore snorts.

"Would you be mad if I told you I was writing a blog in my head?"

I smiled and closed my eyes. Writing all the while.
Posted by Lou Clyde at 4:58 PM No comments:

I know there are worse things in life.  Like being eaten by a T-Rex.

Or falling naked into a vat of boiling lava.  Or auditioning for a musical.

But there are few things worse than a beach trip yeast infection.

(Men, you may be well-served skipping this blog,  for it contains some unsettling details about this lady malady.)

And for those men stupid brave enough to continue, don't say I didn't warn you.

I should have known it was coming.  I had just finished a round of antibiotics.  It was day 2 at the beach.   The itch began.

As you probably know, it is literally impossible to satisfy a yeast infection itch.  Once itched, the itch intensifies.   Exponentially.

Not to mention the fact that it is socially inappropriate to attempt said itch in public.

I was walking on the beach when I first felt it.  Oh, how I wanted to itch it.

I found that walking like a beauty contestant, tightly crossing one leg over the other with each step, helped.  But there was something incongruous with the whole look.

(I suppose a tiara may have helped.)

There is an over-the-counter medication for yeast infections, Monistat, which is quite delightful.  Allow me to describe the treatment.  You stick a little egg up your va-jay-jay,  lance it open with a dagger, and let the medicinal slime drool from the egg all over your lady parts.

(It's best to do this while in a prone position.)

Monistat used to be the only option for yeast infections.  Until Ken Richards invented Diflucan.

I paid 48¢ for my Diflucan pill at the pharmacy in Beaufort on Wednesday. "I would have paid $48 for that pill,"  I commented, as I moved from leg to leg attempting to satisfy my internal itch in a socially acceptable way.

And you know what?   In what must be the most egregious omission of all time, Ken Richards is not on the list of the greatest heroes of history. 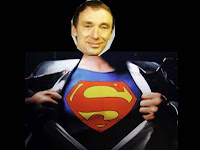 My Superman was overlooked.

Within a day I was able to keep my hands off myself for hours at a time.  My beach yeast infection was a thing of the past.

If it weren't for Ken, I'd be reloading my netherlands with a slime-filled egg.

Speaking of eggs, there is another market for Monistat.   Apparently, it works wonders on chickens suffering from "sour crop".   Here's a quote I found on a raising chickens website:

Add me to the "trying Monistat" bandwagon.  This is my first flock of chickens, but I've had them for two years and they've been perfectly healthy until Comet started acting funny a few days ago. From all I've read, I believe her to have sour crop.  I have her in the house and just force fed her the first piece of Monistat 3 suppository.

Maybe they should have given Comet some Diflucan.   I'll bet it works better. And faster.  With no mess.

I'm just not sure which end it should go in.
Posted by Lou Clyde at 1:52 PM No comments:

I admit it.  My timing could have been better.  In what could only be described as a Lucy Ricardo moment, I jumped into my car wearing my fruit-loop muumuu, lugging my lime green blanket, striped beach towel and teal umbrella. 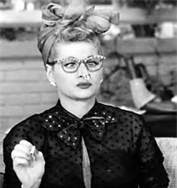 Before all the neighbors sitting around the pool even knew what had happened.

Linda was screaming as loud as she could (under her breath), “Hurry Mom!!!  You’re embarrassing me!”

I put the keys in the ignition ready, to make a quick get-away.

Let me back up.

I 'm going to the beach on Saturday and I have a teeny tiny problem. 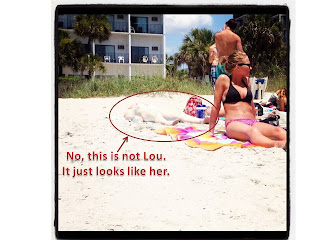 I do not want to be seen in public wearing a bathing suit.

First,  a roll of toilet paper looks tan next to me.

I know that's difficult to believe, considering how good I look fully clothed.

But on the Benjamin Moore color wheel, my stomach is shaded somewhere between "cloud white" and "cotton balls".

And over the years, my six pack has evolved to a two liter bottle.

To that end, I decided to exercise my only option.

I bought a muumuu.

Knowing that my muumuu might make good blog fodder, I asked Linda to take a photo of me modeling it.

At the neighborhood pool.

As we pulled into the parking lot, which admittedly, was overflowing with cars, Linda needed convincing.

We were like a well-oiled machine.  I slapped down the blanket, threw a towel over my legs, opened the umbrella and said "cheese".

But a quick get-away was not in the cards.  My battery was dead.

I took a deep breath and said, “I need to get someone to jump my car.”

Linda looked at me as if I'd grown another head.

“Take off that …thing,” she pleaded.  (I assumed she was referring to my muumuu.)

“I can’t,” I confessed.  “I don’t have anything on underneath.  Except my liter bottle.”

I was wearing shorts underneath, and made a rather unsuccessful pathetic attempt to tuck my size 2XL muumuu into the waistband.  I casually approached a table of neighbors (I did not know).

I could hear Linda groaning from under the front seat of the car.

“Excuse me,” I said nonchalantly.  “Do any of you have jumper cables?”

Now, hindsight is 20-20, but I wish I’d thought of attaching one end of the jumper cables to my umbrella and the other to the lawn chair and asking Linda to take a picture of my jumper cable tanning bed. 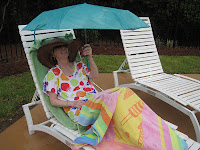 That would have made a great picture!
Posted by Lou Clyde at 4:22 PM No comments: