I know you will find this difficult to believe, considering the depth of my nerdiness;  I was not in my high school marching band.

The reason was simple: our high school marching band did not include an organ.  (Apparently, marching band members are supposed to carry their instruments down the football field, and organs weigh too much.)

Imagine!  All those years of organ lessons in the first grade wasted.

But you know what?

I am so glad I never joined that marching band.

It's because we got our costumes for The Music Man on Saturday.

I did not know the jacket alone weighed more than I do.

Plus, I never noticed all the hardware on the uniform.  Zippers, hooks, snaps, doorknobs.

And the uniforms are made out of wool!

All I can say is we better have a lot of Fabreze in that Green room, because those suckers are going to take on a life of their own after a few shows under those spotlights.

Oh, dear, I just remembered that we all have to carry instruments!

I hope the director doesn't assign me anything heavier than a triangle to carry, or else I may just collapse into a pool of sweat and drown.

Make that seventy-five trombones.
Posted by Lou Clyde at 4:54 PM No comments:

I strongly believe in the importance of developing young minds to help prepare them for future academic success.  To that end, I found the perfect educational game for my 4-year old nephew Shaun. 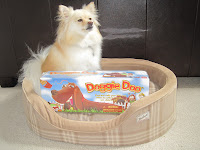 But I didn't just get him the game, I pre-tested it.   Not only to make sure it worked, but to ensure that it met my very high standards.

That's the kind of Aunt I am.

For those of you not familiar with the Doggie Doo Game, it's a simple concept.  The object of the game is to: "Feed and walk your little pup, when he makes a mess you clean it up.  Be the first player to get 3 pieces of dog shit mess on your shovel to win."

The game is easy to set-up.  You place the dog in the center of the table.  Each player takes a shovel.  I bribed my teenage daughter Linda into playing with me.  (She wanted to borrow my car.) 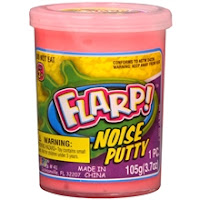 The first step in the game was to feed Rover.  Linda immediately recognized the dog food as that other very educational toy, Noise Fart Putty.

Which made the game even more realistic.

We made dog treats by putting the fart putty into a cookie mold and fed one to Rover.

Then the fun began.

We rolled the die, which told us how many times to pump the leash.  I pumped 3 times.

Rover farted as his treat began to digest. 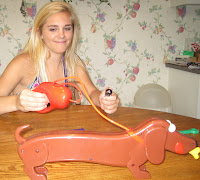 We were getting impatient.

We abandoned the die and started pumping like there was no tomorrow.

"Rover must be constipated," I concluded, looking up his,...um, looking at his tail.

My hypothesis was validated when I consulted the instrucations.  "If Doggie Doo has stomach problems, and no mess is coming out of the dog, feed him just one more time."

After a few pumps Rover delivered.

I was never more proud. 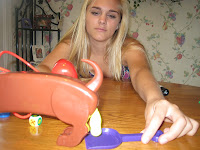 So it passed the test.  I'm mailing it to Shaun, and I'm certain my investment in this educational  game will yield major dividends.

In fact, I see Harvard on the horizon.

Or at a minimum, my sister's lawn should be a bit more clean.
Posted by Lou Clyde at 11:40 AM No comments:

Too many blog topics, too little time.
That's how I was feeling about 15 minutes ago.
I was leaning towards writing about my teenage daughter who realized half way to the theater last Friday night that she wasn't wearing any shoes.  (The same daughter who lost ONE shoe at the bowling alley last winter.)
But I was also considering writing about the  "Sally Ride will roll over in her grave"  Pole Dancing Dolly I recently read about.
Then I remembered the conversation I had with a coworker today who told me she had a Groupon for an acupuncture treatment.
How to choose?!!

Before I started writing, I logged on to snapfish to check on my photo book order.  I noticed that I had been issued a refund.  But I hadn't canceled the order!
I clicked on the Chat button and was greeted by Nath.  I told him my problem and he swam away to research my account.
He returned.
Nath: I have checked your order and I see that you have been issued full refund on your order
Me: But why? I did not cancel the order- I'm anxiously awaiting it!
Nath: It is due to unacceptable image in your order

I laughed out loud.  It was a book of goofy photos from our Colorado vacation.  Maybe it was my albino legs hanging out of my black grandma swim suit...
Me: What? Take a look at the book! This is hysterical.
Blog topic.
Me: Thanks for a great blog topic! (www.notesfromanerdling.blogspot.com)
But it got better.
Nath: I see that your order has not been cancelled
Me: So it must be free!
Nath: Yes
Poor Nath.  He was just trying to do his job.
Me: So, it must be incredibly inappropriate!
At this point Nath was ready to end our little chat session.
Nath: Your order will be shipped and delivered to you
Me: Do you think it was my Albino legs?
Nath: Thank you for your patience on this matter.
But I was on a roll.
Me: I really should get a spray tan, don't you think Nath?
Nath: May I assist you with anything else today?

Me: Nope.  Thanks for your help, Nath.
Besides.  It was like shooting fish in a barrel.
Posted by Lou Clyde at 5:10 PM No comments:

A Little Burrito With Your Hot Sauce

It wasn't my first drive thru experience.  I swear.
I pulled up to the speaker.
"I'll have a bean burrito." "Crackle...crackle..
Any..crackle....ing... crackle..sss?"
It sounded like I was talking to someone in Beirut.
"What?" I said, louder.

Now, I'm an excellent driver going forward.  Reverse?  In a narrow drive through lane?
Not so much.
I didn't quite drive INTO the first window, but I was close.
And it could have been worse.
"That will be $1.89," the drive through girl (let's call her "Takita") whispered to me.
(That's how close to her I was.)
"Would you like some hot sauce with your burrito?"
I told her yes and handed her the money.
Takita gave me a bag and I pulled away.
I was going to wait until I got to work to eat, but I changed my mind.  I opened the bag with my right hand, and rummaged through the packets of hot sauce in search of my burrito.
I couldn't find anything hot.  Was it already cold?   I knew she'd put the burrito in the bag, because the bag was heavy.  The burrito had to be in there!  Somewhere.
But I couldn't find it.  I got to a stop light and inventoried the contents of the bag:  3 napkins, 1 packet of hot sauce.  Another packet of hot sauce.  Another packet of hot sauce.

WTH?
I had 11 packets of hot sauce.
And no burrito.
Back to Taco Bell.
I had to wait in line at the drive thru again.  I considered driving through backwards, but figured the joke might have been lost on them.
When I got to the  speaker,  I radioed Beirut to tell them I was returning for the burrito I'd forgotten to pick up on my first trip.  I then stopped at the first window and gave Takita 10 of my 11 packets of hot sauce.
I pulled up to the second window where two employees were waiting with big smiles on their faces.  It may have been my imagination, but I think they may have been laughing at me.
They handed me a bag that weighed about the same size as my first (burrito-less) bag.
And just for kicks I said, "Can I get some hot sauce with my burrito?"
Posted by Lou Clyde at 10:04 AM No comments: