This is a Papasan Chair Solar Cooker. 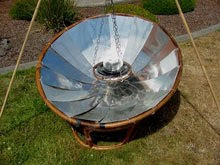 My chair is still behaving.
Posted by Lou Clyde at 3:06 PM No comments: 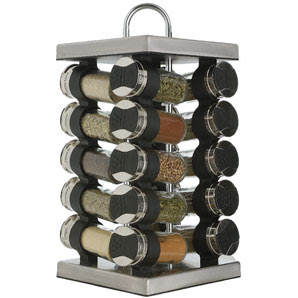 There are several things in my home that annoy me. Until about a week ago, it was my spice cupboard. The cupboard is at eye level, so that I could easily locate the oregano, nutmeg, or whatever the heck was called for in the recipe that I should not have been attempting.
About 5 years ago I invested in a set of 'spice bleachers' to help minimize my annoyance. The theory is that if the spices stand on the bleachers, you will quickly be able to pull out the one(s) you need.
Of course, my spices never cooperated with me. (They clearly never had Mr. Few, my high school chorus teacher growing up. ) They would goof off on the bleachers, trade places with each other in an attempt to hide from me and often times topple off. Spice avalanches were extremely common in that cupboard. I was known to drive all the way to the grocery store to purchase a new jar of cloves to avoid facing the challenge of locating it in my cupboard.
My spice stress is now a thing of the past. I have a spice rack. My spices are safely seat-belted into a horizontal ferris wheel which sits on my counter. "What's that you say, recipe? You need 1/2 teaspoon of rosemary? Let me twirl my ferris wheel and get that for you!" (As opposed to..".Where the *$*#&$^ is that #$%$@# rosemary... NOOOOOOO...step away from that cinnamon! ..TIMBER!!!!")
The 1st runner up to the spice cupboard in the Miss Annoyance pageant was the Papason chair in my bonus room. For those of you not familiar with this item, let me describe it. It is a bowl-shaped chair with an adjustable angle. The bowl rests in a frame made of sturdy wicker. A round cushion fits inside the bowl.
At least it fit in the bowl when we first got the chair.
Now the cushion stretches over the bowl. The bowl itself used to sit neatly on the frame. Now the bowl, with the help of the cushion, tips over and causes the occupant of the chair to avalanche, not unlike the spices in the spice cabinet.
Once the Papasan has avalanched, getting the bowl back onto the frame is no easy chore. You must find JUST the right angle. And putting the cushion into the bowl is as much fun as finding the dill weed in the spice cabinet.
But my chair is turning over a new leaf. It began when I was Googling the spelling of Papasan for this blog. I learned that a scientist has discovered a new use for his Papasan chair. A lightbulb went off in my head.
I stepped confidently to the chair and looked it firmly in the eye said, "if you don't start behaving, I'll make a solar cooker out of you".
For a minute the chair looked like it was going to topple over again, but I realized it was reluctantly nodding it's assent. I guess it knows who's boss.

What's in a name?


I have vivid memories of my confirmation. I went to a very small rural Catholic church in Ransomville, N.Y. and they conducted confirmations about every 3 years (or however long it took to get sufficient numbers of students to warrant the Bishop making the trek to perform the sacrament).

My sister and brother were both confirmed with me and somehow my Mom was able to scare up 3 different confirmation sponsors for us. (Of course, our family had so many cousins that the aunts were rotated in and out of Godmother and Confirmation Sponsor roles like football players in a pre-season scrimmage.)

We did have to attend classes in preparation for confirmation, but the only thing I remember about those classes is learning that the Bishop was going to slap us in the face after confirming us. I am not making this up. I recall sitting in the church next to my sponsor (Aunt Mary, who slept through the whole ceremony), anxiously awaiting the belt from the bishop. It was entirely anti-climactic - more of a tap than a smack.

There was a parent meeting at the start of the summer where the confirmation coordinator reviewed the requirements: attending every class, never missing mass, volunteer hours in the community, taking tests, attending retreats, curing cancer, etc. I also learned about the dreaded "Saint Paper". Linda had to pick out a saint that she admired and write a paper about that saint.

My friend Becca has a graduate degree in theology, so we asked her for advice on an interesting saint. She told Linda that there was a saint named Polycarp, who was a martyr burned because of his faith. But the coolest thing was that he smelled like bread when he was being burned. And they couldn't kill him by burning him so they had to stab him or something to make him die.

So Linda wrote the paper on Saint Polycarp. She was one step closer to confirmation.

Except for one teeny, tiny problem. It doesn't have to be a problem, but it kind of is. Somehow, during the parent meeting, I missed the part about how the Saint you choose becomes part of your confirmation name. Linda came home from CCD last Sunday telling me that her Confirmation name will be Linda Anne Polycarp.

So we are faced with a dilemma. Do we let Linda honor Polycarp, the Patron saint of Panera and let her go down in Catholic records as Linda Anne Polycarp, or does she write another paper and become Linda Anne Teresa, or something else more socially acceptable.

If it were me, I'd be Mary Louise Polycarp. In a heartbeat.

She stuck her warty chin out even farther and pulled at a stray hair growing out of her cheek and said, "I told you we didn't take anyone after 4:00".
I looked straight into her evil red eyes and said, "You didn't say anything about not taking anyone after 4:00".
There was a long, uncomfortable pause and she realized that we were going nowhere. And, as if a switch had been turned, she looked at Linda and said, "Please put your face up to the machine and read the letters in the 1st row."
And that was it.
Linda read, "w-i-t-c-h"
I'm making that part up, but I wish she'd thought to do it.
Posted by Lou Clyde at 1:49 PM 1 comment: 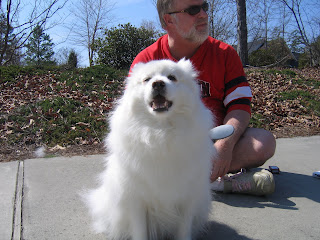 This has been a tough week for me and my family. We had to say goodbye to our dog Sabbie.
For the past 13 years Sabbie has been an integral part of our family. It seems like just yesterday when we adopted him from a PetSmart in Jacksonville. Although nobody could accuse him of being obedient, Sabbie was the sweetest dog in the world.

I had been thinking about writing a tribute to Sabbie in this blog. And then I found a poem left on the kitchen counter that my daughter Linda wrote the day after Sabbie's death. This is the best tribute of them all:

What more is there to say?
Posted by Lou Clyde at 11:55 AM No comments: