Over the past few years the Japan Trend Shop has been my “go-to” web site for cutting edge beauty aids.   And I have benefited greatly.

The Beauty Nose Butterfly Clip has firmed and tightened my nose, creating my perfect proboscis profile.

Then there's the Popeka Anti-Aging Mouthpiece.  My cheeks and jaws now look 15 years younger as a result of blowing into the magical mouthpiece.

And we cannot forget the Beauty Voice Trainer. Thanks to that miraculous device, I now sound exactly like Celine Deon or Whitney Houston (depending on which song I’m singing).

So you can imagine my excitement when I noticed that the Japan Trend Shop has a new product for dogs.

Kevin wasn't quite as happy.

I pointed the I-Pad in Kevin’s direction.

He began to slink away.

I read Kevin the product description:
"It might well often be compulsory for your pooch to wear a muzzle when out and about, but that doesn't mean it needs to be boring! Bright, fun and with a touch of the bizarre, these Oppo Dog Muzzles will transform your familiar canine friend into a semi-duck, designer "billed" dog."

I got goosebumps.  Imagine being able to transform my canine friend into a semi-duck!  A designer "billed" dog.

"Come on Kevin! Let's go to the Dollar Store!"

It didn't long to find what I needed to make my own Nerdling Version of the The Oppo Dog Muzzle Quack Duck Bill Designer Pet Protection:  one sparkly yellow foam visor and some scissors.
It was simple to make.  And Kevin looked so dapper in his new bill.  But there was something missing.  He needed something else to complete his look.

Then it struck me (no pun intended).  Kevin needed his Thunderjacket. 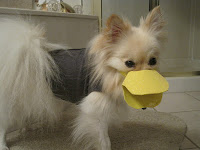 Kevin says he wants his dignity back.

I have no idea what he's talking about.
Posted by Lou Clyde at 4:26 PM No comments: 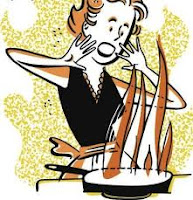 I was assigned the Hash Brown Casserole.

Because it was something that I couldn’t mess up.

It was Christmas morning in Wisconsin.  We were staying at my in-law’s for the holidays.  I was in the kitchen preparing my dish to bring to the Walt Family Pot-Luck Holiday Dinner. 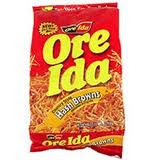 At any rate, the Hash Brown Casserole was simple to make.  A safe bet.  All I had to do was mix together 3 bags of hash browns, a couple cans of soup, sour cream and some grated cheese.  Simple.

I looked at the hash browns in the trash can.  Crap!

(Note this photo is a realistic reenactment of the incident.)

I decided not to panic.  Certainly Dave’s Mom must have an extra bag of hash browns in her freezer.  This was Wisconsin- the hash brown capital of the Midwest.

OK.  Maybe if I cut back on the soup it would work.

Too late.  The soup was already in the bowl.

I could just run over to Pick ‘N Save and get another bag of hash browns.

Nope.  It was Christmas.  Everything was closed.

I looked into the garbage can.  And I thought about the 5 second rule (make that 5 seconds in dog years). 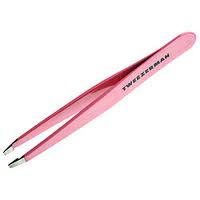 Most of the hash browns were piled in the center of the trash can.  Just above the coffee grounds.  If I was very careful…

And with surgical precision I removed 98% of the hash browns, and placed them into the mixing bowl. The only evidence of my culinary disaster was a shadowy outline of hash brown flakes atop the coffee grounds.  I placed the third bag over top to further mask my malfeasance.

I decided to keep this little secret to myself.

It kind of reminded me of my infamous “fish cake”.  (http://notesfromanerdling.blogspot.com/2011/03/fish-lips.html)

The casserole was a huge hit.  In fact, Dave’s aunt asked me for the recipe.

“Oh, it’s simple,” I explained.  “All you need is a couple cans of soup, sour cream, cheese and 3 bags of hash browns." 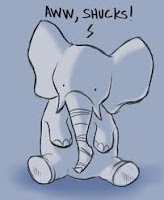 My friend Becca says "shucks" when she gets mad.

But I hardly ever drop the F-bomb.

Especially at a family gathering in front of my in-laws, nieces and nephews, and the neighborhood priest.

The ref came running from the end zone and was heard saying, "Just give it to them".   And they did.

I screamed, "No Firetruckin' Way!"

Except I left off the "iretr".

The room went silent.  My mother-in-law did one of her famous "gasps" and looked at my father-in-law as if to say, "Look what David has brought into the family."

I tried to compose myself.

New England was now on the Buffalo 25 with just 6 seconds on the clock.  Bledsoe threw a Hail Mary...essentially a jump ball.. into the end zone.  Hands were everywhere and the pass was incomplete.

Except the refs called pass interference against the Bills.  On a Hail Mary pass.

"Are you Firetrucking Kidding Me?"  I shouted (again, without the "iretr").

The priest brought out the Holy Water.   (Well, if he had been there, he would have.)

The clock ran out, but since you can't end a game with  a penalty, New England got a first down on the 1 yard line, and scored a touchdown to win the game.

The firetrucking continued.  The priest began my exorcism.  (Again, he would have had he been there.)

I gradually realized that all the conversation in the room had stopped.  Everyone was looking at me.

Somehow I managed to regain my sanity and rejoin the human race.

My brother Tom still talks about this game.  "It's the game that caused me to lose my mind," he recalls.

Yeah.  I can relate.

And in my defense, there are times in life when a simple "shucks" will suffice.

I think Tom would agree with me.  This was not such an instance.

Only a firetruck would do.
Posted by Lou Clyde at 3:22 PM No comments:

Email ThisBlogThis!Share to TwitterShare to FacebookShare to Pinterest
Labels: bad officiating, Bills vs. Patriots, cursing in front of in-laws 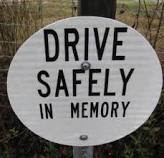 I totally understand.It was a horrendous accident.  A three-way collision with multiple fatalities.  It's not unusual for roadside memorials to be set up near the scene of such accidents.   It's the right thing to do, to honor the victims.  It's a nice thing to do for the surviving families, as well. 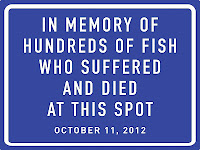 Some people think it unreasonable that California animal activists want a roadside memorial to honor the 1,600 pounds of saltwater bass that died in the October 11 collision.   (On their way to the market.)   According to Peta's request, the sign would remind drivers that fish value their lives and feel pain.  That is so sad.  I never knew fish valued their lives.  That makes it even more tragic.It must have been truly horrific for those poor saltwater bass.  One can only imagine the macabre scene following the collision.  Not to mention the smell. 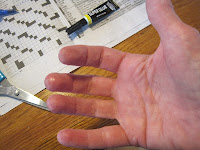 Where the heck is my Kitchen Guardian Angel when I need her?She should have said, "Step away from the Super Glue!"But then again, I  would have ignored her, as I always do. And she would have gotten to say, "I told you so." So, it's probably better that she was nowhere to be found while I was working on my latest project: the VHS Cassette Clutch.I'm sometimes accused of rushing into projects without careful planning.  However, in my defense, I have been blessed with an over-abundance of "Nerdling Enthusiasm,"   which has led to unfortunate results on one or two.. a few.. many occasions.But I was bound and determined to succeed this time.   I wanted my own VHS Cassette Clutch!  To that end, I approached the project methodically, requiring the attendance and participation of every anal gene in my body. 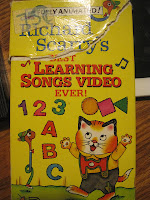 I read the directions several times.  I made a shopping list and collected all the materials I needed for my project: 1 VHS tape, (I chose Richard Scarry's Learning Songs videos), cloth, packing tape, super glue, a crochet hook, 2 hinges, a glass of wine, a glue gun, scissors, wire cutters, and screw drivers.  Check. Check. Check.The first step was disassembling the VHS tape.   I have 2 words for Step 1: Stinkin' Fun.  Step 2 was clipping off the peg-like protrusions inside the VHS tape.  Even more fun.  I was getting confident.  Bring on Step 3.  Apply the hinges with Super Glue. 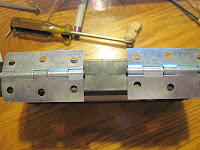 Uh oh.  My hinges were a wee bit large for my VHS cassette tape.
Back to Lowes for smaller hinges.  Perfect fit.

I applied the Super Glue, but it didn't stick.  The hinge kept sliding around, so I held it in place with my fingers.  The hinges stopped sliding around. They stuck.  To my fingers.  I used a pen to hold the hinges in place.  Then the pens stuck to my fingers.   I decided to skip Step 3 and move on to the next step, which involved using packing tape to make a window into my purse.Shut the front door!  Do I really want potential thieves to be able to see all the valuables inside my VHS Cassette Clutch?   No way.  Why not just carry a "Rob Me" sign?!!So I departed slightly from the design and placed fabric window shades over my purse windows.I also departed from the design when it came to crocheting a purse strap using the VHS tape.  I promise, this has nothing to do with the fact that I have no earthly idea how to crochet using yarn, let alone using a VHS tape.  I decided that braiding the VHS tape and my window shade fabric together would results in much more attractive look. But ultimately, I had to face the elephant in the room: Step 3.  A half a glass of wine helped my confidence.  I applied more Super Glue to the tape and the hinges.  And my fingers. So I switched to Plan B.  The packing tape.  I taped the hinges to the VHS tape. I'm an engineering genius. 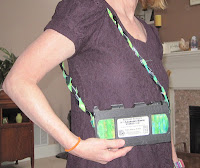 Finally, I was ready to test drive my purse.  It looked amazing.  But what, oh what, should I put inside it???

My calculator.  Too big.

My diamond broach.  Forget it.The only thing that I could get to fit into this stinkin' (yet very attractive) VHS Cassette Clutch was a kleenex: 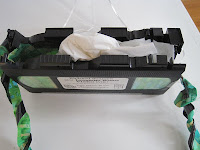 But you know what?   I can always carry my VHS Cassette Clutch when I go to the doctor!  Or to a sad movie!

Or to parent teacher conferences.
Posted by Lou Clyde at 3:11 PM No comments: